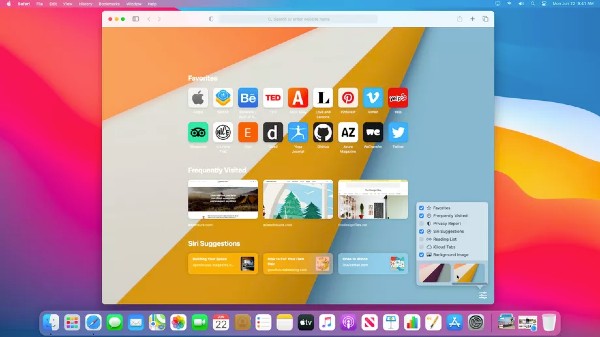 Apple Beta Software Program members can now check out the macOS Big Sur, available in a public beta. The macOS Big Sur brings in a lot of design overhauls and updates to Safari, Messages, and Maps, to name a few. Reports note that the beta version comes with significant design changes across the entire OS.

Apple debuted the macOS Big Sur at the WWDC 2020 a couple of months ago and is believed to be the biggest redesign since the OS X. Going into the details, The Verge reports that the app icons have also been redesigned on the macOS Big Sur, to make it look like the ones on iOS.

Additionally, Apple has introduced a new dedicated Control Center that includes multiple options like Bluetooth, Wi-Fi, AirDrop, and sound and brightness controls. To note, the menu bar on the macOS Big Sur comes with a new translucent finish and houses the Control Center, which also has a very iOS-feels.

Some of the other changes include the Notification Center, which now offers notifications and widgets in a single panel. The macOS Big Sur has also brought in customizations to the Safari start page, allowing users to add favorites and usually visited websites to their homepage. Plus, a privacy report feature in Safari reveals all the blocked trackers.

The Messages app on the macOS Big Sur has also received some improvements to make it quite similar to iOS. Pinned conversations, inline replies, and other updates were spotted on the Messages app. Apart from these major facelift, the macOS Big Sur public beta brings in new system sound notification and more. Apple has also brought back Mac’s iconic startup chime.

Users should note that the macOS Big Sur public beta could still have bugs that could dampen the performance of the Mac system. If this is the device that you work on at all times, then it’s advised to wait until the stable update rolls out without bugs. At the same time, the new enhancements are quite exciting to try out, especially because it provides a smoother user interface. Also, ensure that you back up all the data before you download the macOS Big Sur public beta.