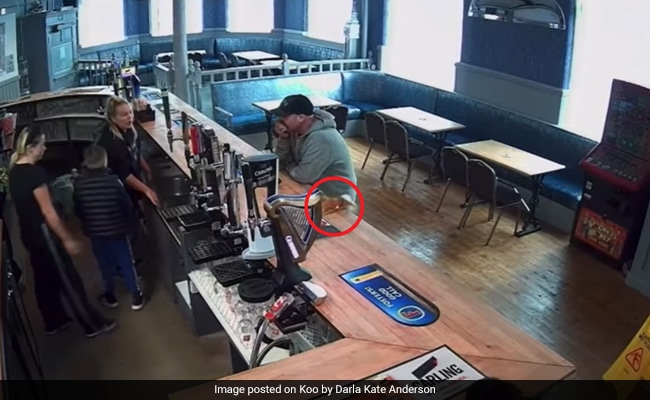 Bizarre CCTV footage appears to show a glass tipping over on its own.

CCTV footage from a pub in England appears to show a glass tipping over on its own. The Blue House pub in Hendon, Sunderland, is 167-years-old and locals believe it to be haunted, reports The Mirror. Now, landlady Darla Anderson has shared a video from the pub which defies explanation. In the CCTV footage, a glass of beer is seen sitting on the counter as customers chat.

However, a few seconds into the clip, the glass mysteriously topples over on its own. A customer sitting near the glass was seen jumping back as it fell to the ground. In the video, it appears as if the glass really did fall over on its own, since no one was close enough to disturb it.

Landlady Darla Anderson, 23, shared the footage on Facebook last week. Watch it below:

“I remember I was just looking at the pint and then it just fell, there was only three or four of us in the pub at the time so there is no way that anyone could have knocked it,” Ms Anderson said to Sunderland Echo.

“I just can’t find any reasonable explanation as to why it happened, all our customers cannot believe it.”

In the comments section, many said they were convinced of paranormal activity after watching the clip, while others pointed out that the glass may have simply fallen over because the bar counter was not flat. Ms Anderson, however, is not convinced.

“I posted it on Facebook and some people were commenting saying that the bar isn’t flat so it just slipped, but the glass was on a mat designed to stop things like that from happening,” she said.

“There is just no way that it would just tip over so it is very strange that it did.”

This is not the first time that videos which defy explanation have captured the Internet’s attention. Earlier this year, a video of a parked motorcycle moving on its own had gone viral online.

Chorafali Recipe: A Gluten-Free Gujarati Snack That Is Easy To Make At Home

Why Visa is complaining about RuPay to the US government