UncategorizedBuilding real buildings on the blockchain

Building real buildings on the blockchain 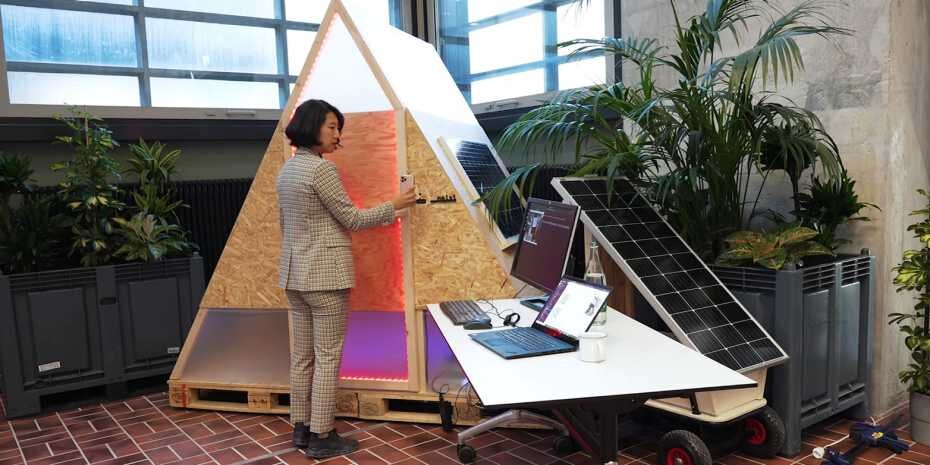 Buildings that own and run themselves: this idea, from the think-tank Dezentrum, was put into action for the first time at ETH Zurich in the form of a prototype. The result is a meditation cabin that shakes up the usual economic and social expectations.

The outward appearance of the small, prism-shaped hut in the recently opened Student Project House on ETH’s Zentrum campus is enough to arouse the curiosity of anyone looking at it. It is decorated with LED lights, connected to a solar panel and has comfortable seats for meditation inside. However, the visionary idea on which the wooden construction is based cannot be seen at first glance. “It’s a powerful vision,” believes Hongyang Wang, who began working on the project when she was a Master’s student. “It touches all parts of society and turns many of our basic assumptions upside down.” Now Wang is a doctoral student with the Chair of Innovative and Industrial Construction, which deals with topics such as new technologies, governance strategies and organizational models for construction processes.

The vision mentioned can be a very small one or a very large one, explains Wang. The small vision might look something like the hut in the Student Project House. The solar-powered meditation cabin functions autonomously and anyone can book it online for a certain time period in order to meditate. The pod grants access automatically when a QR code is presented, which is practical. The larger vision starts at a level above the immediate experience of the room, when we look at the way the hut functions and is organized. The name of the project, “no1s1” (pronounced “no one’s one”), provides a clue: the meditation room is a prototype for a building that belongs to no one. It runs itself and rents itself out. In future, the intention is for its income to take the form of the cryptocurrency Ethereum—the current test version does not cost real money—and to be held in an account (wallet) controlled by the building itself. In theory, it could not only call someone itself for repairs in the event of damage, but even legally own itself, facilitated by a decentralized autonomous organization (DAO) linked to the building.

Infrastructure with a natural ecosystem

The organization of this computer-supported self-governance is based on blockchain technology, which promises enormous potential for decentralization: for example, it enables contracts to be concluded without a central, highly trusted authority, such as a bank or government, vouching for it (cryptocurrencies rely on the same idea and technology). So a large number of people—or digital systems—can coordinate for a specific purpose without the need for hierarchical structures or human mediation. These “smart contracts” form the basis for the DAO that operates the meditation pod. Within this, people can organize themselves and even change the rules in the contracts in accordance with democratic principles—meaning the structure does not need a human owner. Furthermore, the continuing development of the rules could theoretically be fully or partly taken over by artificial intelligence. Depending on their development, autonomous forms of organization such as this could one day have the same legal status as traditional companies.

This is not yet the reality. Nonetheless, it demonstrates the implications of the idea: no1s1 as an alternative model for real estate and infrastructure. Wang emphasizes that the technology is not yet ready, and no1s1 is still the first project known to her worldwide that connects a DAO with a physical property. She explains its potential in these terms: “If real estate does not have a human owner, the automated coordination eliminates high administrative costs. Above all, however, the model does not need to be profitable.” Any surplus income could go back into the maintenance of the structure or be returned to the users.

If the vision is followed through to its logical conclusion, you arrive at an idea called “Nature 2.0”: a self-sustaining human infrastructure that manages and regulates itself—just as a natural ecosystem such as a forest does. The project demonstrates an alternative to the idea of living space as capital investment, says Wang’s doctoral supervisor Daniel Hall, Professor at the Institute of Construction and Infrastructure Management at the ETH Department of Civil, Environmental and Geomatic Engineering (D-BAUG): “The growing economic inequality in many places, and developments on the real estate market provided one of the starting points for our thinking.” This is where he sees the idea of decentralized, autonomous properties playing a role: “Through technical demonstration that no1s1 can be self-sustaining instead of profit-maximizing, we can take another step towards a goal of providing everyone with suitable, affordable housing.”

Not an answer, but a basis for discussion

No1s1 came to ETH as an idea from the Zurich-based think-tank Dezentrum. With the support of project partners Digitec and Ernst & Young, Wang, along with her supervisor Jens Hunhevicz, developed it into her Master’s thesis and a conference paper. The structure is now hosted in the new Student Project House on the main campus. Measured by its vision, it marks the first step on a long journey. “The project throws up more questions than it answers—and that was the point,” says Hall. On the one hand, this refers to the technology: how can a DAO be programmed in such a way that it can be modified by a group of people in a democratic process, but cannot be manipulated by anyone? But perhaps the more complex questions are those concerning society and the economy: for instance, who finances the construction of a building that belongs to itself? And who should be able to contribute to the DAO of a particular building?

Not least there is the question of whether the concept would really bring a positive change—and if it might not even have negative effects. The authors of the research paper openly question whether self-governing houses would actually lead to lower rental costs, and whether smart contracts and artificial intelligence would act in the long-term interests of society. “The project is not primarily aimed at changing things, but at sounding out the possibilities for change,” Wang clarifies. It’s about raising social questions that have emerged in the course of rapid technological development.

As the project continues, Wang and Hall are now focusing on the use of the property and the rules of a decentralized organization of this kind. “With the prototype we want to find out how the structure is used and understand the future needs of its users,” explains Hall. For that reason, it is ideal that the hut is in the new Student Project House and is widely accessible. He also considers the purpose of a meditation room to be well-suited for a prototype, as it is comparatively simple to use. Wang, who likes to meditate herself, also sees it as symbolic: “Meditation has taught me how similar humans are in their innermost selves, how everyone has potential and all deserve the same respect.” This is another reason, she says, why she would like to use her research to find ways to make the world a little fairer using technology.

This document is subject to copyright. Apart from any fair dealing for the purpose of private study or research, no
part may be reproduced without the written permission. The content is provided for information purposes only.