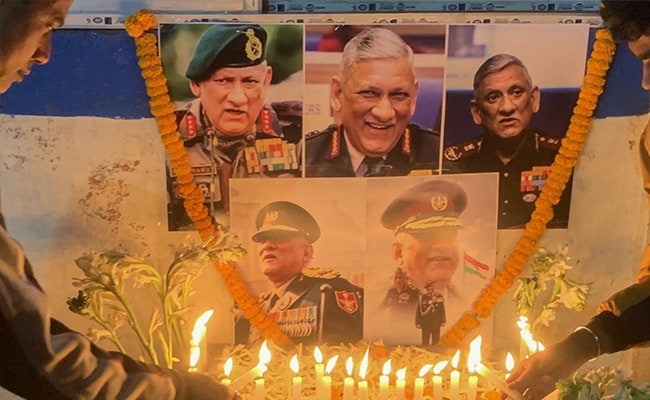 Gen Rawat, his wife and 11 others on board an Indian Air Force helicopter died in the crash. (File)

Condolences over the demise of Chief of Defence Staff Gen Bipin Rawat poured in on Wednesday from several countries, including the US, Russia, China and Pakistan.

Gen Rawat, his wife Madhulika and 11 other people on board an Indian Air Force helicopter died in a crash near Coonoor in Tamil Nadu on Wednesday, the Air Force said.

The US Embassy extended its deepest condolences to the Rawat family and the families of those who perished in the crash.

As India’s first Chief of Defence Staff, General Rawat spearheaded a historic period of transformation in the Indian military, the US mission said in a statement.

Gen Rawat was a strong friend and partner of the United States, overseeing a major expansion of India’s defense cooperation with the US military, it said.

“In September, he spent five days travelling throughout the US as part of a counterpart visit with General Mark Milley to discuss military developments and opportunities to enhance our cooperation with like-minded countries. His legacy will continue on,” the Embassy said.

“Our thoughts are with the Indian people and the Indian military, and we pray for Group Captain Varun Singh’s full recovery,” it said.

Chinese ambassador to India Sun Weidong extended “deep condolences on the sad demise of CDS General Bipin Rawat, his wife and other victims in the helicopter crash”.

“My sympathy goes to all the family members of General Bipin Rawat,” he said.

Bhutanese premier Lotay Tshering said it was heartaching to learn of the helicopter crash. “People of Bhutan and I offer prayers for India and the bereaved families. May you find strength to see through the tragedy,” he said.

“My heartfelt condolences to the bereaved families and the Indian Armed Forces,” he said.

“Tragic news. Gen Rawat was a wise man, a brave soldier, a pioneer and a generous host to me only weeks ago. We mourn his death and that of his wife, and all killed in this terrible accident,” Ellis tweeted.

He also tweeted his condolences in Hindi.

Russian Envoy to India Nikolay Kudashev said with deepest regret, he learnt about the sudden demise of Gen Bipin Rawat, Madhulika Rawat and other officers in the crash.

“Russia has lost a very close friend, who played a big role in promotion of our bilateral special and privileged strategic partnership. Grieving together with India. Goodbye, friend! Farewell, commander!” he tweeted.

Australian High Commissioner to India Barry O’Farrell expressed deepest sympathies to the families of Rawat and others on the helicopter.

Australia-India relationship has thrived during General Rawat’s tenure, he said.

French envoy to India Emmanuel Lenain tweeted, “Deeply saddened by the tragic demise of CDS Gen Bipin Rawat, his wife, and several defence officials in a crash. My heartfelt condolences to the bereaved families and the Indian Armed Forces.”

“We will remember CDS Rawat as a great military leader and a supporter of Flag of France-India defence ties,” he said.

European Union’s envoy to India Ugo Astuto also extended heartfelt condolences to the family of Gen Rawat, his wife and families of armed forces personnel who lost their lives.

Japanese envoy to India Satoshi Suzuki said he was deeply saddened by the tragic demise of Gen Rawat, his wife and 11 Armed Forces personnel in an unfortunate accident.

“I extend my deepest condolences to the bereaved family members of the people killed in the accident,” he said.

Ambassador of Israel to India Naor Gilon said he is deeply shocked and saddened by the tragic deaths in the chopper crash.

“The people of Israel stand side by side with the Indian people and government in mourning the death of Indian heroes. Om Shanti,” he tweeted.

German Ambassador to India Walter Lindner said tweeted, “What tragic news! Our deepest condolences to General Bipin Rawat’s family and all relatives of those who perished in the tragic helicopter crash in Tamil Nadu.”

He also tweeted his condolences in Hindi.

Singapore mission in India said it was saddened to learn that the chief of defence staff and others on board the chopper have passed.

“Had the honour of meeting Gen Rawat several times. His vision, candour and warmth will be missed. Deepest condolences to all grieving this terrible loss,” it said.