Featuring an eggshell-like finish, the Outlier Air earphones are all matte-black buds with a circular LED light on the back panels that glow red or blue to indicate if they’re paired or charging. The buds have a rounded, dome-like shape and they’re also considerably bulky. The earphones pop out of most ears considerably but have a pretty decent fit owing to the sharply-angled ear nozzles. However, despite having a snug and secure fit, the earphones do not have excellent noise isolation, and most sounds can be heard easily when the music is off or playing on lower volume levels. 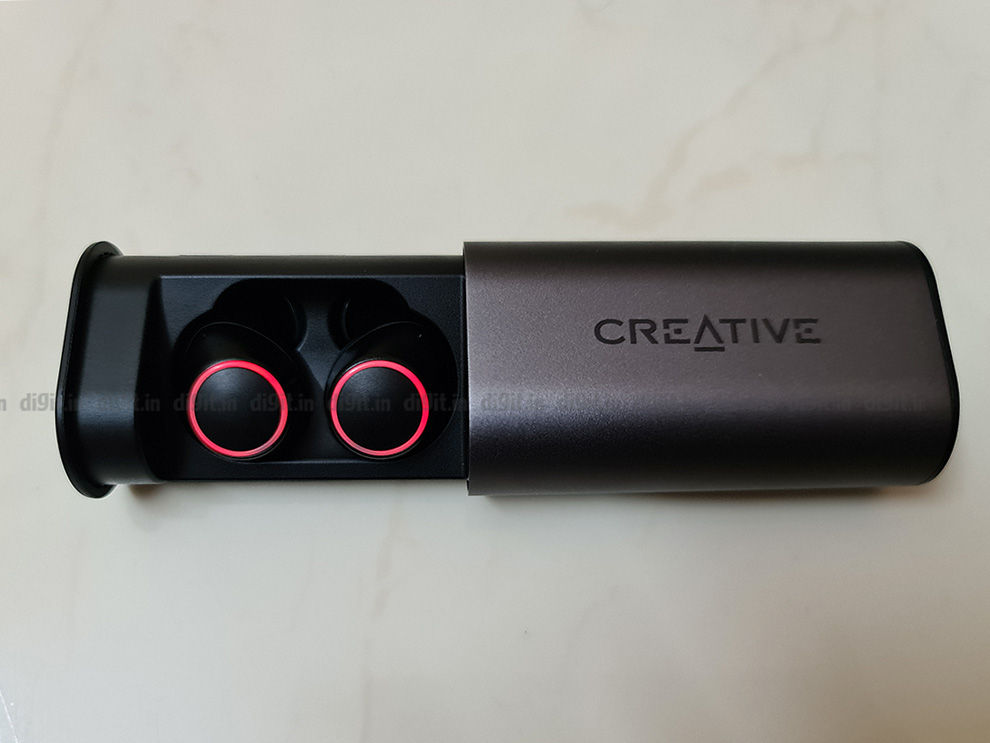 The earphones are lightweight and fit comfortably within the ear, and we didn’t have any fit issues even when we used them during light jogging and some activities around the house. They do come with an IPX5 water-resistant rating, so if you wish to use these nifty buds while working out or running, you needn’t fret about sweat damaging them. There are, however, no fins or wings provided to further aid in stabilisation. The 1MORE Stylish True Wireless do come with those, so if you’re looking for a pair of buds with excellent stabilisation and fit, you might want to consider those instead. 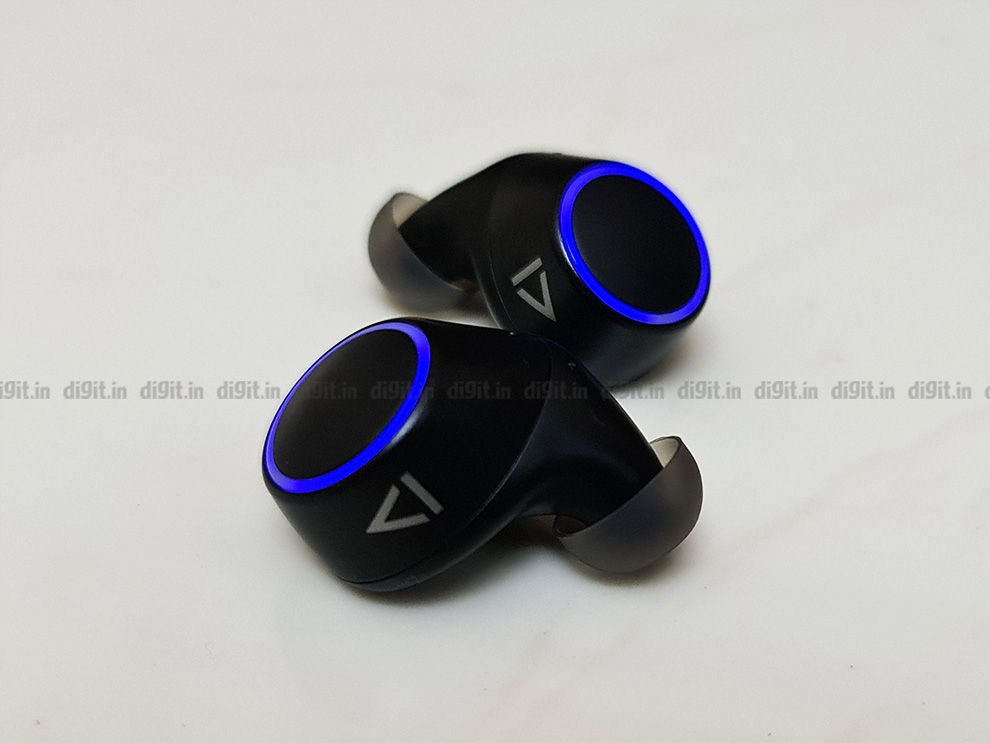 Now, coming to the on-board controls, they are situated inside the LED light ring. Creative has opted for physical buttons instead of touch controls, which is something we don’t usually mind, but the physical buttons on these earphones are woefully hard to press. They require quite a substantial amount of force to push in, and this inadvertently ended up causing us discomfort when we pushed the buttons. More about the controls in the next segment. 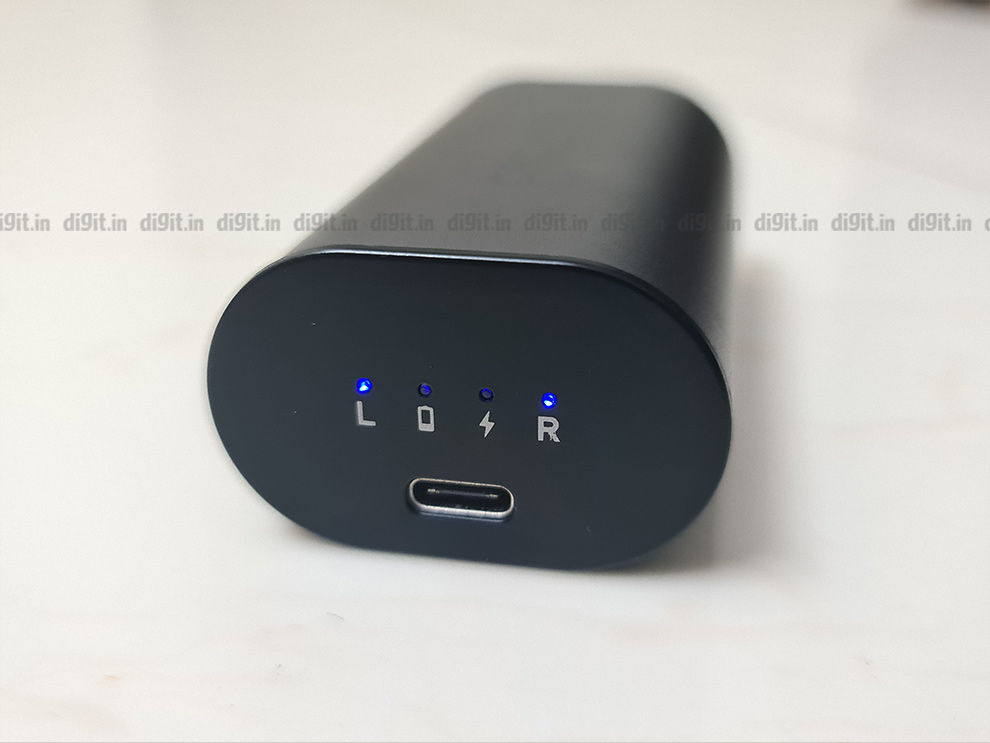 Finally, moving on the charging case, the Outlier Air has an impressively built metal charging case sporting an aesthetically-pleasing gunmetal grey shade. Now, the case is definitely on the bulkier side when it comes to dimensions but it is still surprisingly lightweight. Featuring an obloid-ish shape, the charging case can be opened up by pushing one end which reveals a slide-out tray for the earphones to dock into. The right side of the case houses the USB-C charging port and four LED indicators to display the charging status.

Powered by Bluetooth v5.0, the Creative Outlier Air boasts solid wireless connectivity. One without any lags and stutters in the audio or media, that sometimes plagues wireless earphones. The wireless transmission range is rated at 33 feet, and in our tests, the Bluetooth connection managed to penetrate one or two walls with ease and extended from one end of an apartment to another, which is pretty standard. The earphones also support high-quality audio codecs such as AAC and aptX, which not only reduce latency but also improve the overall sound quality. 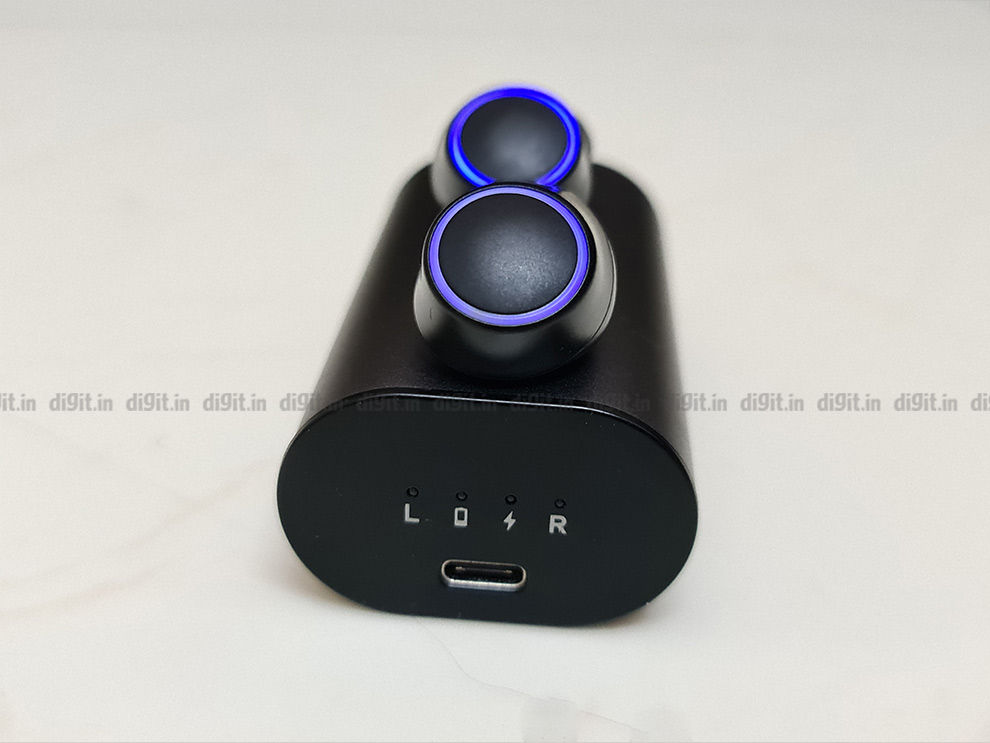 As mentioned before, the Outlier Air comes with physical controls that are placed within the LED ring on the back panel of the earphones. Using the controls, you can pause/play music (by single tapping either bud), skip tracks forwards or backwards (by double tapping the right or left earphone respectively), and even increase or decrease volume (by pressing and holding the right or left button respectively). Additionally, triple-tapping either bud will activate your device’s voice assistant. You can also answer or decline calls via these controls. 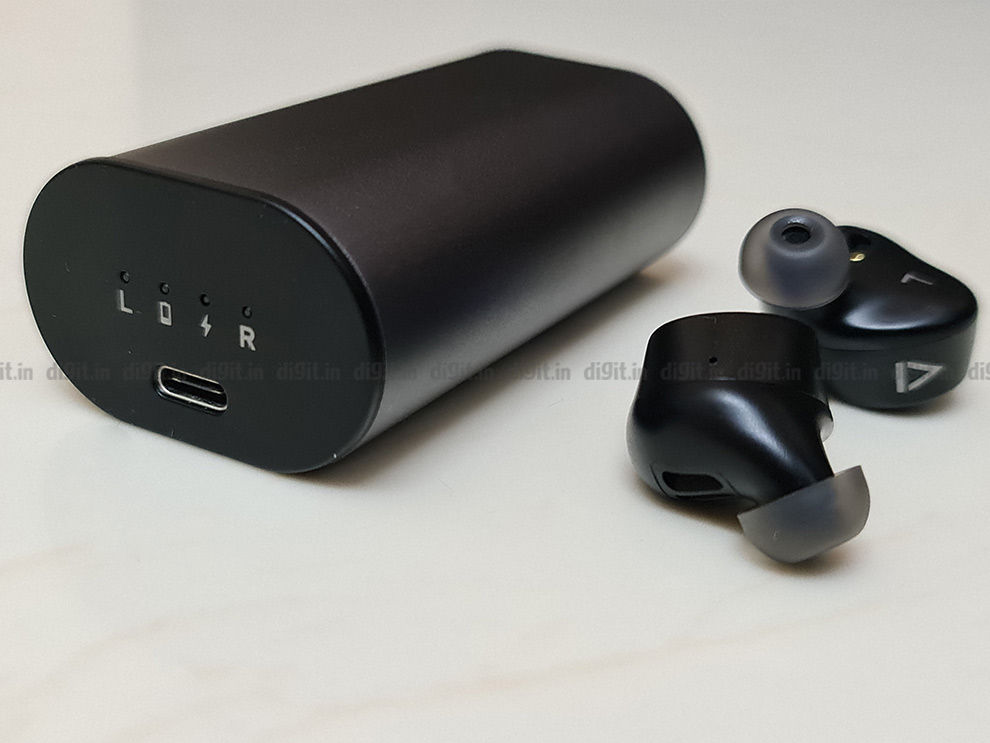 The controls are pretty standard for Bluetooth earphones, but they don’t always work flawlessly on the Outlier Air. Often, when we attempted to skip a track or summon the voice assistant, the double or triple tapping action wouldn’t be registered and instead the track would just get paused, which was a pretty aggravating experience and led to us opting to use the smartphone to control everything instead. You also have to pause the music first to activate the voice assistant, which is frustrating, yet again. It’s clear that Creative needs to work on the media controls in their future models. 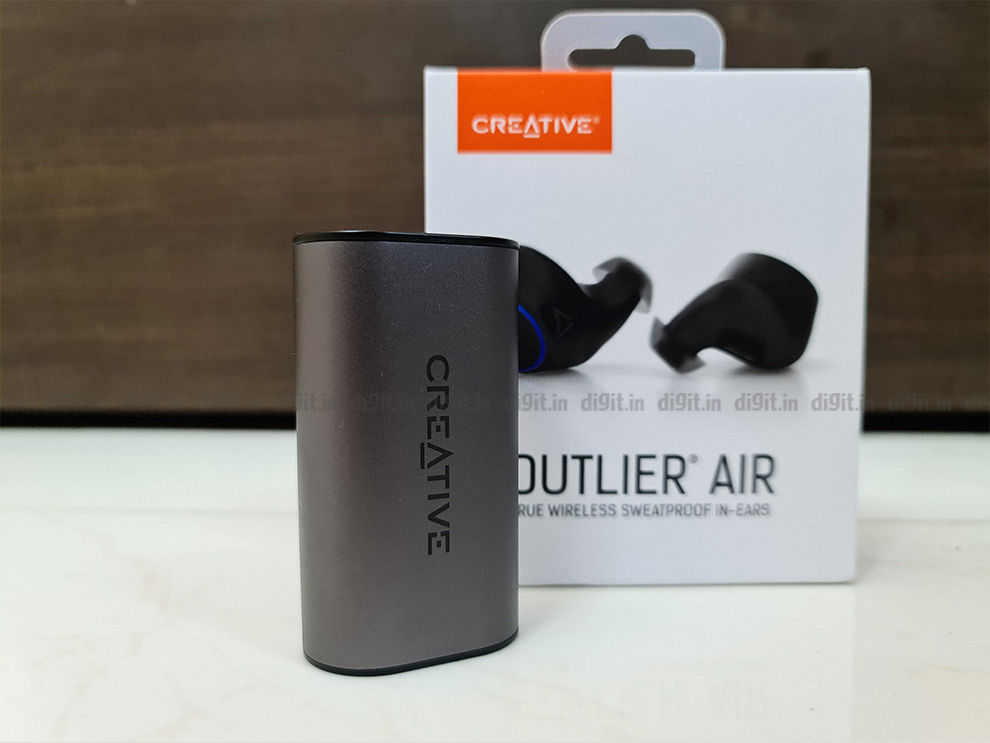 Now, moving on to one of the most lucrative features of the Creative Outlier Air – the battery life. The earphones’ battery life is rated at a whopping 30 hours in total, with 10 hours of continuous playtime on the buds themselves. In our tests, we recorded 8 hours and 20 minutes of playtime on the buds, which is under the company claim, but is still impressive, nonetheless. The case easily charged up the buds two times over and still had some juice to spare. Charging up the case to full takes about 2 hours, which is a pretty decent speed.

The earphones also come with some additional nifty features such as USB Type-C charging (which we love), IPX5 water resistance, and the ability to use either bud as the master bud.

Sporting 5.6mm graphene-coated drivers, the Creative Outlier Air certainly has an ‘oomph’ in their sound while still keeping all the frequencies relatively balanced and under control. There’s a slight bass bias in the sound that can be felt in tracks such as Pull Me Under by Dream Theatre. The drums in the track slightly overpower lead instruments and vocals in the track, and there’s slight auditory masking in the mids. 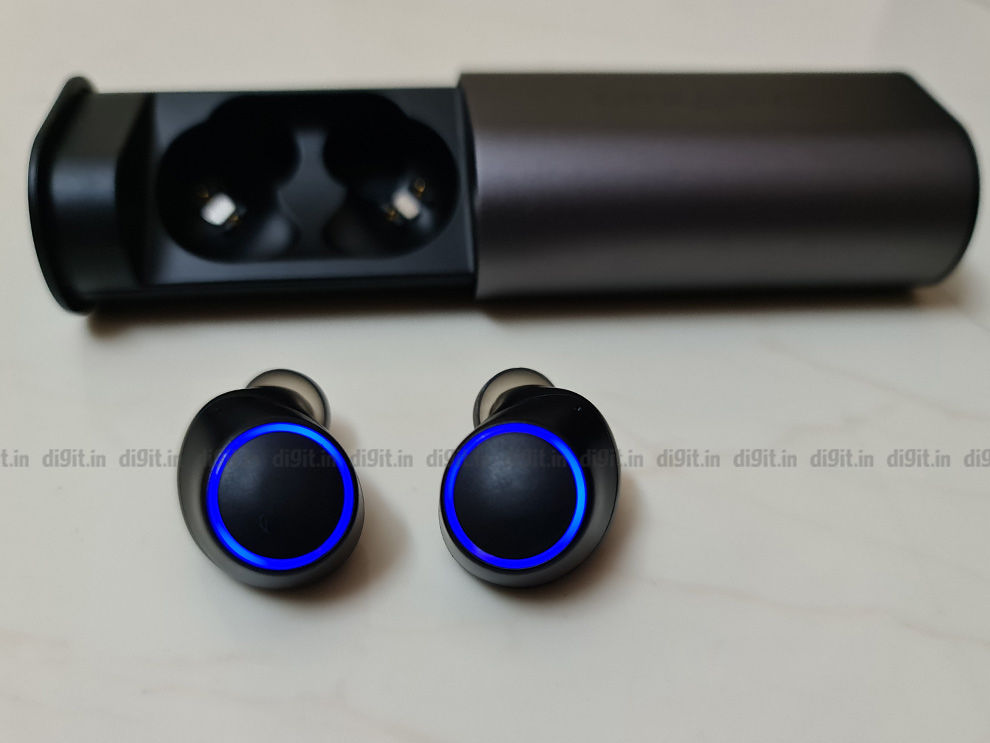 Nevertheless, this is us being extremely nitpicky and the truth of the matter is that the Creative Outlier Air is definitely one of the best-sounding true wireless earphones in the sub 10K price range. The mid-highs are also slightly elevated which enhances the clarity of high-frequency instruments and most female vocals. There’s also a marked improvement when using aptX over AAC. However, either way the sound is still on par or better with competitors in this price bracket.

The sense of instrumental separation and the reproduction of three-dimensional space is also excellent on these earphones, which isn’t surprising considering that Creative did bring us the acclaimed Super X-Fi amplifier and the SXFI technology. There’s also minimal distortion in the sound reproduction even at high, unwise listening levels. Overall, the Creative Outlier Air impresses us with its relatively solid sound quality and its stellar instrument separation abilities. 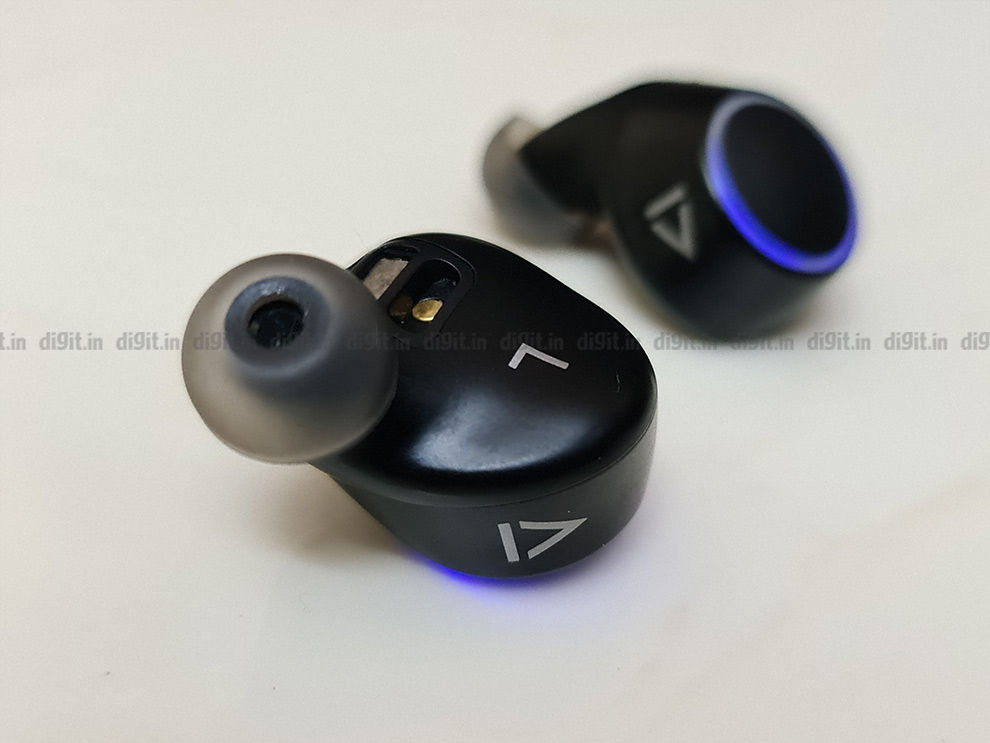 The microphone, on the other hand, is mediocre at best, and earphones from Sony and even 1MORE at this price point do a slightly better job at picking up your voice and relaying it accurately on calls. The microphone intelligibility is good though, with it being able to pick up everything we said and relay it with voice input in the Notes app quite accurately.

Setting aside some issues with the physical controls, the Creative Outlier Air has managed to impress us in most aspects and ticks a whole lots of boxes for what we’d consider a solid pair of true wireless earphones. Priced at Rs 6,999, these earphones are relatively affordable and offer solid sound quality, good battery life, excellent instrument separation, and support for the AAC and aptX audio codecs. These earphones do compete with another solid true wireless earphone, the 1MORE Stylish True Wireless, in this price range but the better battery life as well as USB-C charging gives the Outlier Air the edge over the 1MORE product. We’d strongly recommend these earphones to those looking to purchase a solid pair of true wireless earphones under 10K.

India vs South Africa: Where we need to get better is right in front of us, says KL Rahul | Cricket News