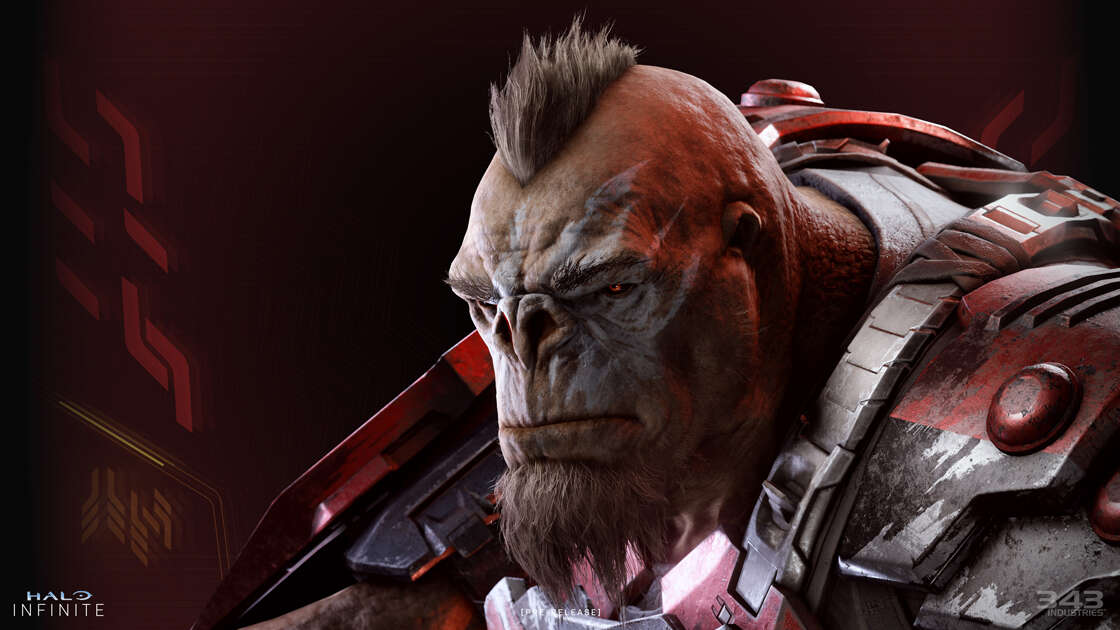 343 Industries has shared new details and released a new image of Craig the Brute from Halo Infinite, and he’s had quite a glow-up. Once the posterboy for Halo Infinite’s not-so-great-looking graphics, Craig is now sporting a new look. And he has a beard, too. In the latest installment of the Inside Infinite blog post, 343 ran through some of the changes to Craig.

“The team has sort of a love-hate relationship with Craig. While it was fun to see the community gravitate towards Craig, he unfortunately represented some content and systems that were not ready for prime time in that demo,” 343 said. “The positive outcome of Craig was that he was one of the factors in gaining some more time to finish work and get Brutes to a place where the team is happy with them. This is one of the many positive examples of 343 working with and aligning with the Halo community around expectations. Players who look hard enough will still be able to find some evidence of Craig in Halo Infinite, his spirit lives on!”

Craig has “glammed up,” the developer said. “He is feeling very good about himself and has fit back in well with the rest of his Brute friends. He has also picked up a new hobby and has done well for himself. Long live Craig!”

This is just one of the morsels of news from the new installment of Inside Infinite. The full blog post is ridiculously in-depth, touching on character designs and the UX/UI. Be sure to read the full post to catch up on all the latest news.

The Craig the Brute meme stems from the July 2020 Halo Infinite campaign demo that fans voiced their displeasure for. Craig became the symbol of the game’s lackluster graphics. Microsoft promised that Craig’s looks would improve, and it appears they have.

Halo Infinite’s new campaign footage, which was released on Monday, has been received far more positively than the July 2020 showcase, with many commenting that the game looks great and seems to be shaping up well.

In a big shift for the series, campaign and multiplayer are separate, standalone products. The campaign is a $60 game, while multiplayer is free-to-play. Both are also included with Game Pass when the game launches on December 8.

No breakthrough in 13-hour China talks, but next meet soon | India News