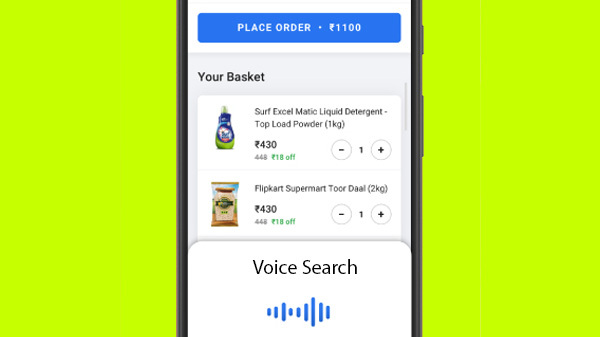 Flipkart has announced the launch of new services to help its customers. The newly launched Voice Search services will allow users to search all products across 80+ categories via speech. The feature has been launched in Hindi and English languages. Besides, the feature is expected to solve the language barrier as more than 75 percent of internet users belong to a non-English speaking group.

This feature is likely to help people in smaller towns in searching the products easily. The company also said that it has conducted a study with Bain & Company, which claims that online shoppers, especially in tier two cities are contributing a lot to e-retail platforms. Additionally, the feature comes with Automatic Speech Recognition, Text-to-Speech for Indian, and Natural Language Understanding.

“The Voice Search merges these technologies with its existing text-based search capability, which is trained on years of Flipkart data to offer a powerful voice search platform that can understand natural language-based long and complex queries made by users in different accents,” the company said. Flipkart also said that all these features have been built by Flipkart’s in-house engineering and data sciences team. However, you use the Voice Search feature users have to go through these steps.

Steps To Use The Flipkart Voice Search Feature: Details

Step 2: Now, you have to click on the mic option and look for the soundbar option. Then, the application will start listening to all the commands.

Step 3: After that, you are allowed to search for anything you are looking for.

Furthermore, the e-commerce platform said that the Voice Search feature has received an impressive response in the country and initial trends show that there are five million queries every day.