TOP STORIESHum Do Hamare Do Review: Kriti Sanon's Is Most Noteworthy Performance In...

Hum Do Hamare Do Review: Kriti Sanon’s Is Most Noteworthy Performance In Unfunny Caper 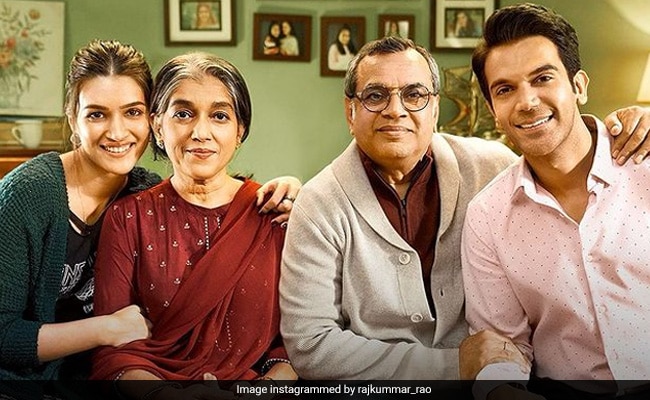 Hum Do Hamare Do Review: A promotional poster of the film. (Image courtesy: rajkummar_rao )

A patchy script, unimaginative direction and inconsistent performances queer the pitch for Hum Do Hamare Do. A profligate dramedy that fritters away the advantages of an admittedly unusual plot, all its calculations go amiss. Nothing that it proffers, no matter how harmless and well-meaning it might seem, delivers a rounded sum that makes sense.

Even pure drivel is known to have been saved when inspired lunacy and sustained comic fervour have been thrown into the mix in the right proportions. This comedy of error-prone, slipshod gags is desperately short on those two essential attributes.

At the heart of Hum Do Hamare Do, streaming on Disney+Hotstar, are a young man, played by Rajkummar Rao, who will do all it takes not to lose the girl he loves and an old loner, portrayed by Paresh Rawal, who missed the bus many years ago because he developed cold feet and continues to live to tell the tale of a thwarted liaison.

The unfunny caper, director Abhishek Jain’s Hindi debut, revolves around a Chandigarh man who has nobody to call his own barring a best friend who is always at his beck and call. The enterprising buddy is the go-to man when the hero is at his wit’s end, which is way too often for his own good.

The protagonist is introduced as a boy in a brief prelude. The orphan works at a highway dhaba for a man nicknamed Premi (Paresh Rawal). He is treated well enough by the employer but his life is a dead-end. A warm-hearted customer (Ratna Pathak Shah) comes by and gets chatting with the boy.

On learning that he is called Baal Premi, she suggests that he should think up a better name for himself. She tips the child generously and leaves. It is obvious that Premi and the kind lady will return to the boy’s life. More on that later.

Years go by. The boy, Dhruv, now a busy VR gaming whiz kid who teaches impoverished children in his free time, has a chance encounter with a freelance vlogger, Anya Mehra (Kriti Sanon). The former’s standoffish behaviour leaves the woman fuming. Sure enough, in keeping with the true tradition of Bollywood rom-coms, love blossoms between the two. But there is a hitch.

Dhruv figures out that Anya dreams of marrying a man who has a family and a dog. There is a strong reason for her desire. He, therefore, goes looking for a pair of fake parents. With his best pal Shanty (Aparshakti Khurrana) egging him on to go the whole hog, he does find what he needs but not before a few hiccups.

The dhaba owner from the opening sequence – we are told is full name is Purushottam Mishra – and Deepti Kashyap, the woman whose kindness left a deep impression on the foundling in the self-same scene, agree, after some prodding, to pretend to be Dhruv’s parents. But the old man, who still rues the opportunity he missed to wed his sweetheart, has the tendency to go overboard when he has had one swig too many.

Awkward situations result and threaten to derail Dhruv’s not so well laid-out plans to worm his way into the hearts of the girl’s parents (Manu Rishi Chadha and Prachee Shah Pandya). Needless to say, it isn’t a cakewalk. There is a worthy match for Anya lurking in the background and Dhruv and Shanty have very little time at their disposal to stall Anya’s impending betrothal with a bridegroom chosen by her mom and dad.

When the counterfeit parents meet the girl’s mother and father, who, too, aren’t ‘real’ in the strictest sense, inevitable complications arise. But does the ensuing rigmarole generate genuine hilarity? Not at all. Riding on a storyline that is as insipid as it is illogical, Hum Do Hamare Do is a meandering mess that relies heavily on laboured humour and a cast of actors not fully in tune with the needs of the exercise.

The most noteworthy performance in Hum Do Hamare Do is delivered by Kriti Sanon, who does her very best to inject some life into the proceedings. She radiates charm and vitality. Every time one sees her on the screen, one cannot help feeling that she deserved a better film. Ditto for the impressive Ratna Pathak Shah, who is amazingly convincing as a woman called upon to playact as a mother to a stranger. Sadly, neither the character she essays nor the film that she is in comes anywhere near doing justice to her.

What of the male lead? Rajkummar Rao is saddled with the task of salvaging a poorly written protagonist whose impulses, compulsions and decisions border on the utterly inexplicable. Why an adult who has put the worst behind him and made a success of his life opt for falsehood in order to marry his true love is beyond comprehension?

It requires an uncommon degree of charisma and unerring comic timing to lift something as insubstantial and unappetising as Hum Do Hamare Do out of the muddle. No such rescue act materialises here. Since the character has no access to straws that are strong enough to cling to and the actor has to reckon with more questions than answers, the film flounders from the word go.

Even Paresh Rawal, a screen performer of proven comic prowess, is largely wasted in a role that dangles between the puerile and the miserable. That, in fact, is true of the film as a whole. It falls with a thud between two stools.

Hum Do Hamare Do is the sort of romp that depends wholly on ensuring a willing suspension of disbelief, which proves to be an unattainable goal for a screenplay that knows no better. The going gets especially tough because in its search for a droll core that can hold and go the distance, the film sinks into a welter of half-baked formulations about biological broods, fractured families and cobbled-up clans.

Notwithstanding all the ado, the numbers simply don’t add up. Hum Do Hamare Do is always at sixes and sevens.