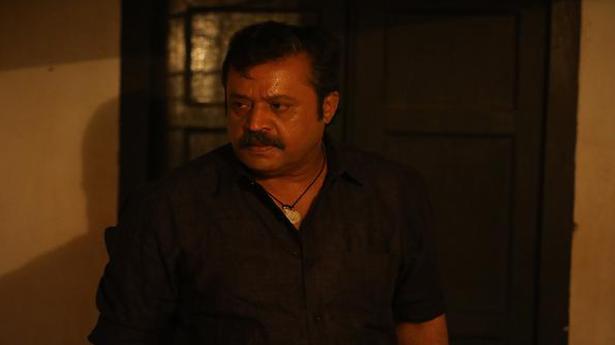 ‘Kaaval’ happens to be a pale shadow, with a sombre, depressing mood all through, which is peppered with a few “mass” scenes to satisfy Suresh Gopi’s fans.

As far as allegories go, Nithin Renji Panicker likes to play it straight. The introduction of Thamban (Suresh Gopi), the central character in Kaaval, happens through one such scene. We see him tending to the tender, injured legs of a chick, which then slowly starts to walk. An eagle flies above, with eyes set on its prey on the ground. Thamban looks up in slow motion, twirls his moustache and stares at the eagle, which flies away scared, apparently having seen the stare from half a mile away. The scary background score makes way for a pleasant one, as Thamban looks lovingly at the chick, now walking without any fear.

The entire movie is essentially about Thamban playing this elderly protector to the children (Evan Anil and Rachel David) of his old friend Antony (Renji Panicker). Now, the Thamban-Antony duo have quite a violent history, as they used to run a parallel justice delivery system in the high range village. The oppressed used to run to them to settle their issues, with the police firmly in the pockets of some rich rowdies. The duo seem to hold contempt for every other kind of avenue to get justice, including trade unions, as evident in one of Thamban’s dialogues. Their muscle might is the only available form of hope in that village, in their world-view.

Nithin, who made his filmmaking debut with the horrible Kasaba, which was lambasted for the way it portrayed its women characters, seems to have learned some lessons in political correctness from that misadventure, for Kaaval is quite clean compared to that. But, when it comes to the filmmaking part, it still harks back to the glory days of the all protective superstar films of the 1990s.

Even in that respect, Kaaval happens to be a pale shadow, with a sombre, depressing mood all through, which is peppered with a few “mass” scenes to satisfy the stars fan’s. As if the scriptwriter was unsure of whether the audience will be sufficiently excited by this, there are references to yesteryear hits like Commissioner thrown in. There is an eagerness on the part of the scriptwriter to follow by the book all the usual tropes of a movie of this kind, with hardly any attempt being made to bring in a fresh element. The ‘accidents’, the attacks and the counter-attacks all can be predicted from miles away, only that the laboured pace of the movie makes them arrive much later than when we expect them to.

Although touted in some quarters as Suresh Gopi’s ‘comeback’ film, he had a much better comeback recently in Varane Avashyamund. In Kaaval, he gets an almost one-note character. Kaaval might have worked a couple of decades back, but much water has flown since that time. Now, it appears as a tired rework of an old formula, and the movie itself seems to be an allegory of this fact.

Is Disneyland’s Splash Mountain Getting Ready For Its Princess And The Frog Redesign?

‘Jan-E-Man’ Malayalam movie review: Hits all the right notes with its inventive script

Is Disneyland’s Splash Mountain Getting Ready For Its Princess And The...

Netflix Confirms Air Date for Season 2 of Michael B. Jordan’s...

‘Jan-E-Man’ Malayalam movie review: Hits all the right notes with its...