Bollywood superstar Shah Rukh Khan‘s son Aryan Khan has finally been granted bail by the Bombay High Court on Thursday evening after several rounds of denial. The 23-year-old was nabbed by the Narcotics Control Bureau earlier this month from a cruise ship that was raided for illegal substances by the authorities. Soon after the news broke, SRK’s fans and his friends from the industry expressed their happiness over the development. Among several other celebrities who took to social media to react to the news, was filmmaker Karan Johar who is Shah Rukh’s long time friend and collaborator.

Johar took to his Instagram Story section to share a selfie with the actor where both look happy. He dropped a heart emoji with the photo. 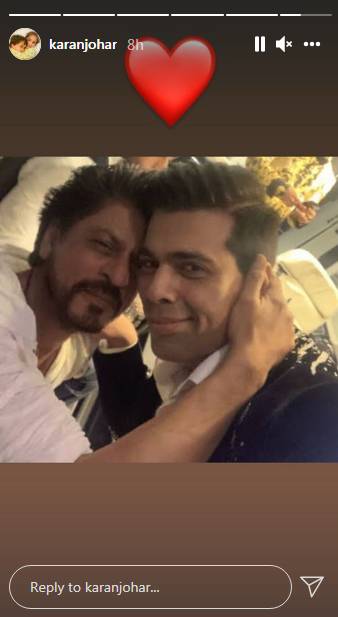 After 3 weeks in jail, Aryan Khan, Arbaaz Merchant, and Munmun Dhamecha were granted bail. The bail argument hearing was going on for more than three days. Aryan was lodged in the Arthur Road Jail for over 20 days after being detained by the NCB. Senior Advocate and former Attorney General of India, Mukul Rohatgi, represented Aryan in his bail plea before the Bombay High Court.

Shah Rukh’s daughter and Aryan’s sister Suhana Khan took to Instagram to share a collage of their childhood photos with the actor and captioned it as, “i love u”

Shanaya Kapor, Sanjay Kapoor and Maheep’s daughter who is also Aryan’s childhood friend, took to Instagram to share a childhood photo with the star kid. After the news of his bail came out, several Bollywood celebrities including Malaika Arora, her sister Amrita Arora, R Madhavan, filmmaker Hansal Mehta, Mika Singh and others took to social media to congratulate SRK and support him.

Take a look at what they wrote: Thank god . As a father I am So relieved .. … May all good and positive things happen.— Ranganathan Madhavan (@ActorMadhavan) October 28, 2021

Congratulations to #AryanKhan and to the other accused for getting bail. I’m so happy that it was finally granted, bro @iamsrk Bhagwan ke ghar mein der hai andher nahi. You have contributed hugely to the fraternity. God bless both you and your family. 🙏🏼 pic.twitter.com/nF5omCTyAg— King Mika Singh (@MikaSingh) October 28, 2021

Meanwhile, many other celebrities from Bollywood including Salman Khan, Karan Johar, Preity Zinta were seen visiting Shah Rukh at his residence while Aryan was in jail.

Pete Davidson Just Got Some Kind Words From Bill Murray, Which Might Help Balance Out That Kanye West Rap Diss