Like pixels to my ears: Asus headset uses mini LEDs to animate earcups 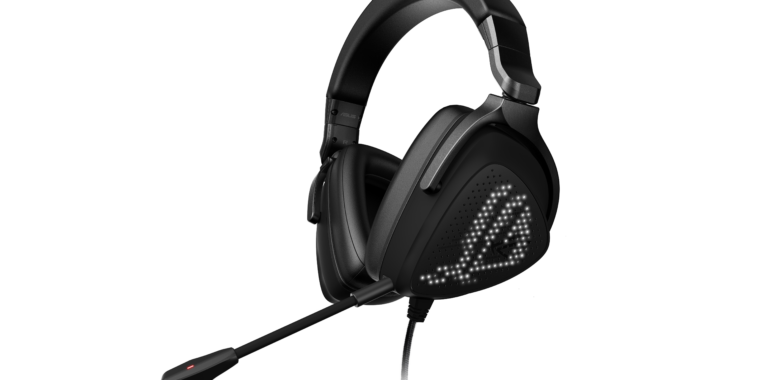 Because a gaming headset sits on your head (where you can’t see it), its looks aren’t all that important. But that hasn’t stopped headset makers from blinging out their products. Besides, if you’re on camera livestreaming or talking to your teammates, you might be looking to spice things up with pink cat ears or RGB-infused earcups. The Asus ROG Delta S Animate offers a new, pixel-powered twist to gamers who want to put on a show.

Asus has put its AniMe Matrix custom lighting design system on both of the Delta S Animate’s earcups. Mini LEDs fill the space and light up to depict preset or customized effects selected via Asus’ free Armoury Crate software. An Asus spokesperson told Ars Technica that the ROG Delta S Animate has over 100 mini LEDs per earcup. Until this week, the AniMe Matrix was only available on select Asus Zephyrus gaming laptops. Asus’ decision to continue offering the feature in new PCs—and now in a new category—shows the company is seeing some interest in the concept.

Want ghosts flying across the earcup pixel by pixel before turning into a pumpkin? Why not?

Feeling flirty? A dot matrix heart will convey your feelings to anyone in sight of your side profile.

You can also program the mini LEDs to react to your voice, with the effect becoming more intense the louder you speak.

This Soundwave feature is one I’ve tried on the Asus ROG Delta S headset, which has RGB LEDs around the earcups’ perimeters. It worked seemlessly there, even if the colors looked a bit faded on my webcam. Hopefully, the tiny LEDs in the Asus’ new headset are bright enough to be visible in various lighting environments (Asus didn’t share a brightness spec).

You can even make your own animation by uploading an image to the software (Asus recommends a white one) and then playing with specifics, like brightness, contrast, and delay times. You can also program the mini LEDs to scroll through words.

A dedicated knob on one of the earcups lets you turn the animations on and off, and you can also control volume and toggle the microphone with on-ear controls.

The headset weighs 0.68 lbs, and the D-shaped earcups are lined with your choice: leather or a combination of leather and mesh fabric.

Asus seems to have paid attention to audio quality as well, carrying over the specs of its impressive Delta S headphones. The new headset’s 50 mm neodymium drivers are standard among modern gaming headsets, but the cans’ frequency response is higher than the typical 20 – 20,000 Hz, peaking at 40,000 Hz. An impedance of 32 ohms is also a smidgen higher than the 30 ohms we often see in gaming headsets.

If you want to add some flair to your cranium, this headset could be a unique way to do it. Asus said the ROG Delta S Animate will be available in mid-to-late December for $250.

Ars Technica may earn compensation for sales from links on this post through affiliate programs.