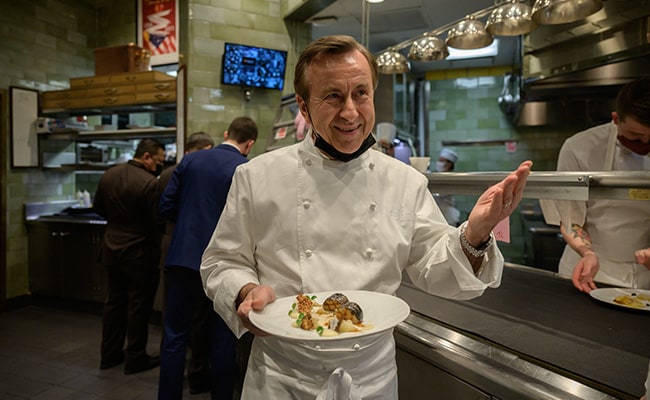 Daniel Boulud took a big hit in the COVID-19 pandemic

French chef Daniel Boulud, who has been living in New York for almost 40 years, was named best restaurateur in the world by Les Grandes Tables du Monde on Monday for his flagship restaurant “Daniel.”

The association of 184 top restaurants worldwide said that the Lyon native, who moved to New York in 1982, “embodies, for many North Americans, French gastronomy, or even gastronomy, period.”

Boulud, 66, defines his cuisine as French in its cooking and textures but with American products and flavors. Besides “Daniel,” which has two Michelin stars, in New York, the chef has other restaurants in the United States, Canada, Dubai, Singapore and the Bahamas.

Boulud told AFP after the news broke that this latest in a long list of honors represented a “professional dedication and really a sign of friendship and support from colleagues” in an environment widely seen as extremely competitive and high-pressure.

Like all New Yorkers, Boulud took a big hit in the Covid-19 pandemic that killed at least 34,000 people in his adopted city, which bore the brunt of the first wave of the virus in the United States in early 2020.

Some of his establishments closed, but “Daniel” kept going, setting up a terrace of covered shelters on the sidewalk “with heating in the winter and air conditioning and music in the summer” for die-hard fans.

Emerging from the pandemic, Boulud thinks New York will remain “one of the five most attractive cities in the world” and will always enjoy a prominent place in French gastronomy.

The economic and cultural capital of the United States and a cultural mosaic of 8.5 million inhabitants, New York is home to 183 French restaurateurs, according to the French consulate.

“In love” with New York and now an American citizen, Boulud still boasts of being “the most French of all French chefs in the United States” thanks to a “cuisine which has its French references” but which “never stops innovating.”

The price of one of his “exceptional” dinners runs to about $300 a head including wine and service, according to the restaurateur.

“Customers want to have fun, to splash out on wines, they go out a lot. We see them with a regularity and a loyalty that reassures us”, said Boulud, who is now looking forward to the return of visitors from Asia and Europe.

Gadgets Monster - 0
Jason Reitman has been on a press tour rivaling The Neverending Story...