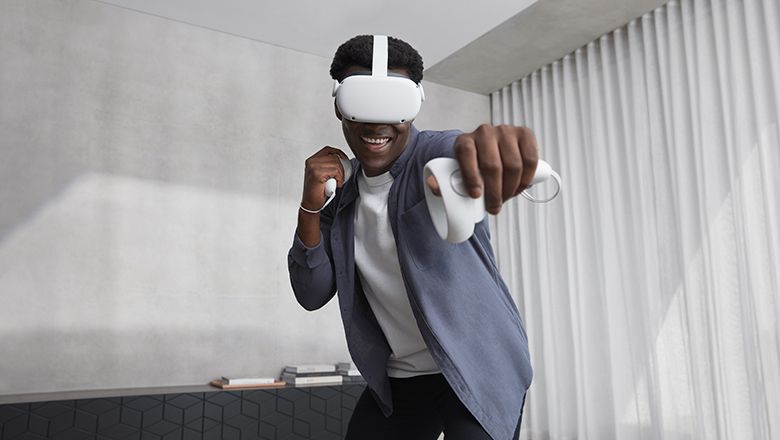 Facebook (now called Meta) just announced its latest VR headset – dubbed Project Cambria – at its most recent Connect event. It isn’t the Oculus Quest 3, unfortunately, with Meta instead explaining that this new device will be home to groundbreaking technology which aims to help establish the earliest days of its metaverse.

Don’t worry, though, as Meta is still working on the next generation of its more budget-friendly VR headsets.

At an earnings call for the company earlier this year, company CEO Mark Zuckerberg told investors that Meta has been working on “new hardware [that] will fit the same platform [as the Quest 2]” for some time. We’re not yet certain whether those comments are in reference to an Oculus Quest 3 headset, a newer version of the Oculus Quest 2 or indeed this newly-announced Project Cambria, but we’ll expect more clarification soon.

As it happens, a new and improved Quest 2 model is now on the shelves, packing 128GB of storage for exactly the same price as the existing base version – making it better value, and an easier recommendation, than ever.

But we’re still mighty excited to see what new VR products Meta has up its sleeve, in addition to Project Cambria.

So, what do we know so far about this potential Oculus Quest 3 headset? Below, we round up all the latest news, rumors and predictions for the most anticipated product in the world of VR.

We weren’t expecting to see a new Oculus device until 2022, but with Project Cambria supposedly launching next year, we could see Meta’s next Quest headset delayed to 2023.

With the Quest 2 launching in October 2020, only a year and a half after the original, we had assumed the Quest 3 would follow a similar timeline.

We’d be surprised to see it launch as late as 2023, though, given Meta’s clear appetite to establish itself as the home of mainstream VR gaming. But with the potential to clash with its own hardware now a genuine reality, the company might put some distance between its releases.

The signs are promising, though, and more information is being revealed about the next Quest device as the year goes on. In an interview with The Information, Zuckerberg not only confirmed that the Quest 3 definitely in the works, but that the company is already in the early stages of work on the Oculus Quest 4.

“Because of how hardware gets developed, you kind of need to know what your next three products are going to look like all at the same time,” said Zuckerberg.

“It’s not like software where we’re changing it every couple of weeks. We have product teams spun up now working on the next few generations of virtual reality and what Quest 3 and 4 are gonna look like.“

Although there’s a big difference between actually creating these products and defining what they’re “gonna look like”, this is good news for those who are keen to find out more about the Quest 3.

It’s not all positive news, though. In April 2021, details were shared of a recent online chat between two key Oculus executives who suggest its next device is more likely to be an incremental Oculus Quest 2 Pro upgrade rather than a full-on Oculus Quest 3 follow-up.

That assumption was corroborated in a Twitter Q&A with vice president of Meta Reality Labs, Andrew Bosworth, who said that right now, a Quest 3 headset is still “a little way off.”

We’re not holding our breath, then.

Given the improvements made by the Quest 2 over its predecessor, we’d expect the Quest 3 to remain a standalone VR headset with customary improvements to battery life, processing power and resolution. The Quest 2 boasts a 50% sharper picture than the original device, which sets an impressive benchmark for the Quest 3 to follow.

The Quest 2 also upped the refresh rate to 90Hz from the original Quest’s default 72Hz, and increased that figure again to 120Hz earlier in the year.

It would follow, then, that the Quest 3 will come equipped with a 120Hz refresh rate, although time will tell whether upcoming VR titles can take full advantage of the upgrade given that most games still don’t yet support that higher refresh rate.

Interestingly, a Swiss VR tech manufacturer, CREAL, recently demonstrated its breakthrough in light-field display technology, showing off a headset capable of focusing at long distances and rendering high resolution imagery up close. This technology is capable of generating imagery that accurately represents how we see light from the real world, and though not yet available for the mass-market, may be something we see arrive with the Quest 3.

CREAL also says its display is capable of running at 240Hz – double the 120Hz refresh established by the Quest 2 update – though this does seem a little too big of a jump for the Quest 3 to make.

We could also see changes to the form factor, possibly decreasing the weight further or focusing on comfort-related alterations. As per recent rumors, we’ve seen multiple clips showing a device dubbed ‘Seacliff’ – the supposed codename for a new Oculus VR headset – which could indicate some of the design changes coming to Meta’s next device.

In these videos, one of which you can find below, we see a new VR headset (that seems to be wireless like the Oculus Quest 2) sporting a much less bulky front visor, with the weight instead distributed across the front and with a pack at the back.

Naturally, we can’t confirm the validity of these videos, but it’s exciting to think that a possible Oculus Quest 3 could be getting a major form refresh.

We’re sure the software of any new Oculus device will be updated to improve hand tracking, too – especially as the kind of haptic feedback we’re seeing in the PS5 DualSense controller seems like it could elevate VR experiences if it came to the Quest’s pair of controllers in a meaningful way.

An almost inevitable feature of the Quest 3, though, will be its integration with the Meta ecosystem, meaning you’ll likely need a Meta account to access the platform. This prerequisite means you’ll again be subject to Meta’s data monitoring practices – so if you’re morally against the Quest 2’s data-harvesting methods, you’ll be out of luck once more.

That’s a significant saving over the price that the original entry-level Oculus Quest model opened sales at. We expect that a Quest 3 couldn’t get too much cheaper, and we’ve seen Oculus adopt a ‘same price, but better specs’ strategy when upgrading the Oculus Rift to the Rift S.

Knowing Meta’s plans for the hardware to become the go-to mainstream VR platform, it’s a pretty safe bet that it won’t get more expensive than the current Quest 2 model.

In our review of the Oculus Quest 2, it was hard to find fault with a VR headset that proved immersive, comfortable and easy to use. And yet, while it clearly leads the pack in the VR market, it still falls foul of some of the pitfalls that the technology as a whole suffers from. Here’s a list of updates we want to see on the Oculus Quest 3:

One of those technological pitfalls, and perhaps an unavoidable one, is the motion sickness that can often ensue when using any VR headset. Depending on your tolerance for whirring and blurring, the Quest 2 can be one helluva dizziness-inducer. While there isn’t yet a clear path to making any VR headset immune to user dizziness, it’s nonetheless something we’d like to see improved on the Oculus Quest 3.

The same goes for the fit of the device. While the Quest 2 is indeed a comfortable weight when on the head, it can still be a little claustrophobic to achieve a good, tight fit. Again, it’s a problem encountered by almost all VR headsets, and a base-level issue that the next generation of hardware should at least attempt to better address. Those aforementioned design rumors suggest the new Oculus device could solve some of these issues.

Other improvements we’d like to see include a more effective in-VR Oculus Store. While the equivalent store on browser and in the app makes it easy to discover new releases and search for upcoming games, the store inside the headset itself seems to roll the dice on what apps are shown with no way to quickly navigate to new content. This makes it difficult to pre-order games and discover new titles to purchase when using the device, which is a pivotal part of ensuring the headset maintains replayability.

While the Quest 2 has a competent party invitation system to get you game-to-game with your friends, there isn’t a social space to engage with others in-between. It would be interesting to see the Quest 3 introduce a virtual social space, in the same vein as NBA 2K’s neighbourhood area, to share some downtime with others. What’s with the multi-person furniture in the current home environment if there’s nobody to share it with?

Sharing screenshots and videos on Oculus devices has never been easy, and it’s an issue that the Quest 2 tried to address with little success. You still need to jump through several hoops before you’re able to share your VR content, which is often captured haphazardly anyway, so we’d like to see the Oculus 3 make the whole deal more accessible. 1080p video, app integration, proper audio syncing – that’d all be nice, too.

The road ahead for Oculus Quest 3

While VR gaming is a medium that has certainly gained popularity in recent years – the Quest 2 reportedly received five times as many pre-orders as its predecessor – it’s still not considered to have cracked the mainstream market.

At least, that’s the opinion of Mark Zuckerberg, who reportedly said in 2018 that 10 million VR users were needed to ensure the Oculus platform was “sustainable and profitable for all kinds of developers.” He did add, though, that “once we get across this threshold, we think that the content and the ecosystem are just going to explode” (as reported by RoadtoVR).

There’s also a gaping hole in the market right now which the Oculus Quest 3 could aim to fill. The Valve Index is one of the best VR headsets we’ve tested so far, but transistor shortages have effectively shut down manufacturing of the device for the past year, making it very difficult to get hold of one. A new Oculus device, then, could learn from the successes of Valve’s headset and achieve a real foothold in the VR industry.

Rumours, of course, are also swirling that an Apple VR headset is in the works (along with an Apple car, smart glasses, TV and so on…) which could mean heavy competition in the years to come. Multiple tech heavyweights fighting for the top spot can only be a good thing for VR gaming, though, so we await with bated breath what the Oculus Quest 3 can bring to the table.