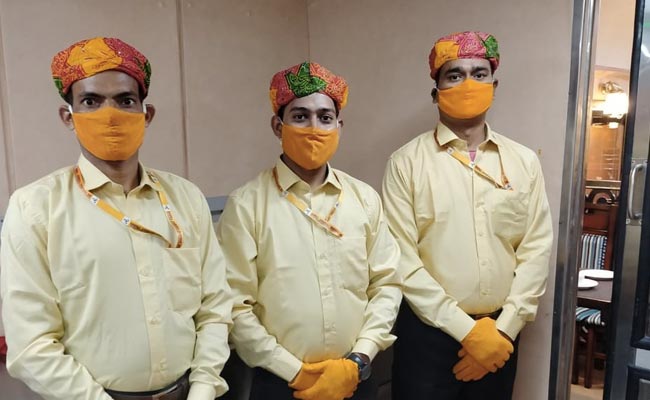 The Ramayan Express is equipped with first-class restaurants, a library and shower cubicles.

Bowing to protest by seers in Ujjain in Madhya Pradesh, the IRCTC on Monday evening said it will change the saffron attire of waiters on board the Ramayan Express, which had invited the ire of a section of sadhus.

The seers, earlier on Monday, had taken strong objection to the saffron attire of waiters on board the IRCTC-operated Ramayan Express and dubbed it as an “insult” to Hindu religion.

They had threatened to stop the train in Delhi on December 12 if the dress code was not withdrawn.

“We have written a letter two days back to the Union Railway Minister lodging our protest against waiters in saffron serving refreshments and food in the Ramayan Express.

He said seers will stop the train at Delhi’s Safdarjung railway station if the saffron dress code of the waiters was not changed, adding it was necessary for protecting the Hindu religion.

The Indian Railway Catering and Tourism Corporation (IRCTC), in a retweet to a media outlet which ran this agency report, said, “It is to inform that the dress of service staff is completely changed in the look of professional attire of service staff.”

When contacted for his reaction on the IRCTC announcement about the change in attire, a delighted Avdeshpuri said, “It is a victory of (Hindu) religion and ‘sanskriti’ (culture)” and that it was his duty to raise the issue.

The country’s first Ramayan circuit train chugged off on a 17-day journey from the Safdarjung railway station on November 7, and will visit 15 places associated with the life of Lord Ram.

Covering a distance of more than 7,500 km, the train will take the pilgrims to places such as Ayodhya, Prayagraj, Nandigram, Janakpur, Chitrakoot, Sitamarhi, Nashik, Hampi and Rameshwaram.

The Ramayan Express is equipped with first-class restaurants, a library and shower cubicles.

Police Lathicharge On Candlelight March In Lucknow To Break Up Protest

omicron: Will India see Omicron wave? ‘It’ll be clear in a month or two’ | India News

The Last Duel Interview Gets Awkward When Ridley Scott Swears at...