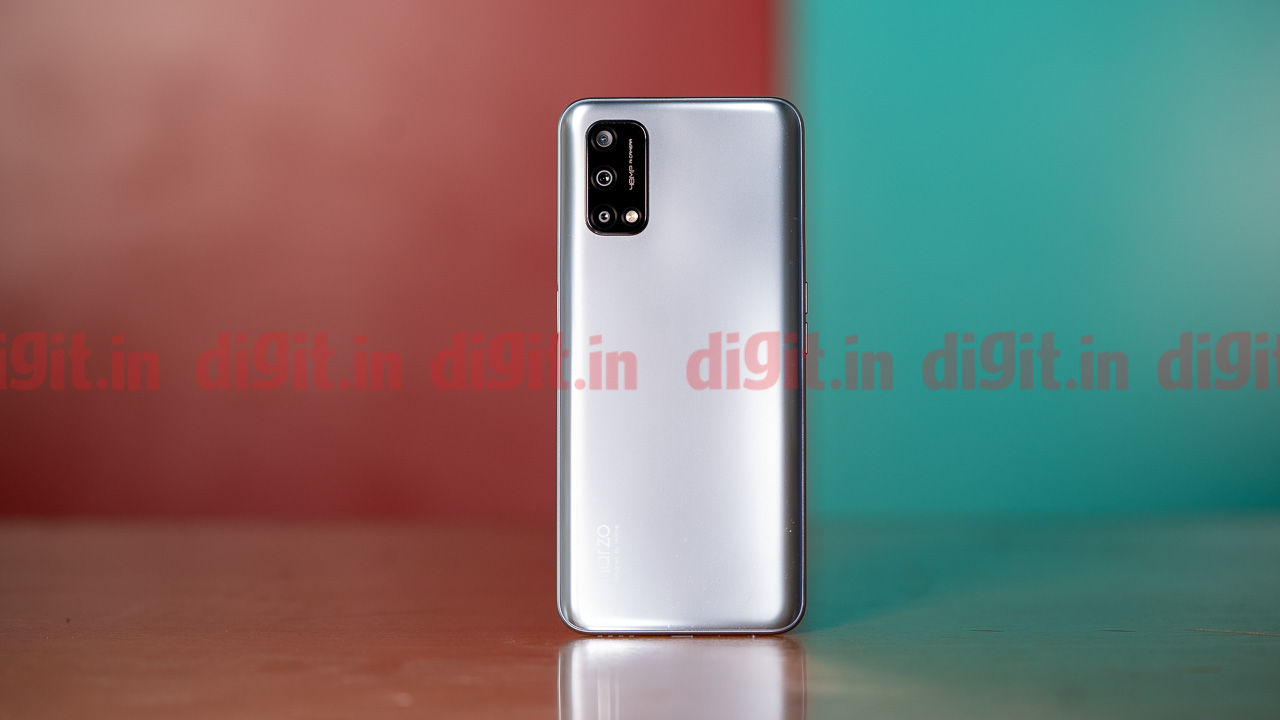 We’re not even into the third month of the year 2021, and Realme has already launched as many devices. The fourth smartphone to join the ranks this year is the Narzo 30 Pro, coming right on the heels of the Realme 7X Pro (Review), the Realme 7X, and the Narzo 30A. Narzo has been about offering relatively more powerful devices at price points that are typically lower than comparably spec’d devices. The Narzo 30 Pro might feel like a rebadge of the Realme X7, but let us straight away clarify that it is not. The Narzo 30 Pro does offer more for less on paper, but let’s figure out just how much of those promises it lives up to.

The Realme Narzo 30 Pro is powered by the MediaTek Dimensity 800U processor an octa-core chip. Accompanying this MediaTek chip is 6GB of RAM and 128GB of UFS 2.1 storage. We have already tested this chip out in the Realme X7, so we have a fair idea of what to expect. However, the Narzo 30 Pro is its own device, so it went through the paces, without any presumptions. First up, we have synthetic benchmarks. The Realme Narzo 30 Pro posts decent numbers across the board, with an AnTuTu score of 340508, and GeekBench 5 numbers hitting 584 and 1776 on single-core and multi-core tests respectively. The multiple tests that comprise the GFXBench benchmark also post decent numbers for the Realme Narzo 30 Pro. However, we have to take all these numbers with a large grain of salt. This is because the MediaTek chipset is boosting the CPU and GPU clocks to their maximum, disregarding thermal limits and more importantly, disregarding the load being put on them. When we profile the CPU using GameBench while running AnTuTu and GFXBench’s Car chase benchmarks, we see all cores on the MediaTek Dimensity 800U get clocked up to max. MediaTek has been known to employ this trick to get their chipsets to rank higher on benchmarks and while the company says what they are doing is “well within accepted practices,” we are of the strong opinion that it is not. Benchmark tools allow us to put devices on an even playing field, and this practice by MediaTek is frankly, unfair. When running our CPU throttle test, the Density 800U comes down to 85 percent of its performance by the end of the run, which isn’t too bad. However, taking a closer look at the graph shows that the chipset with its corresponding cooling solution is not capable of sustaining peak clock speeds for any decent period of time. The chip drops down to the 80s rather frequently and we’re not too happy about it. 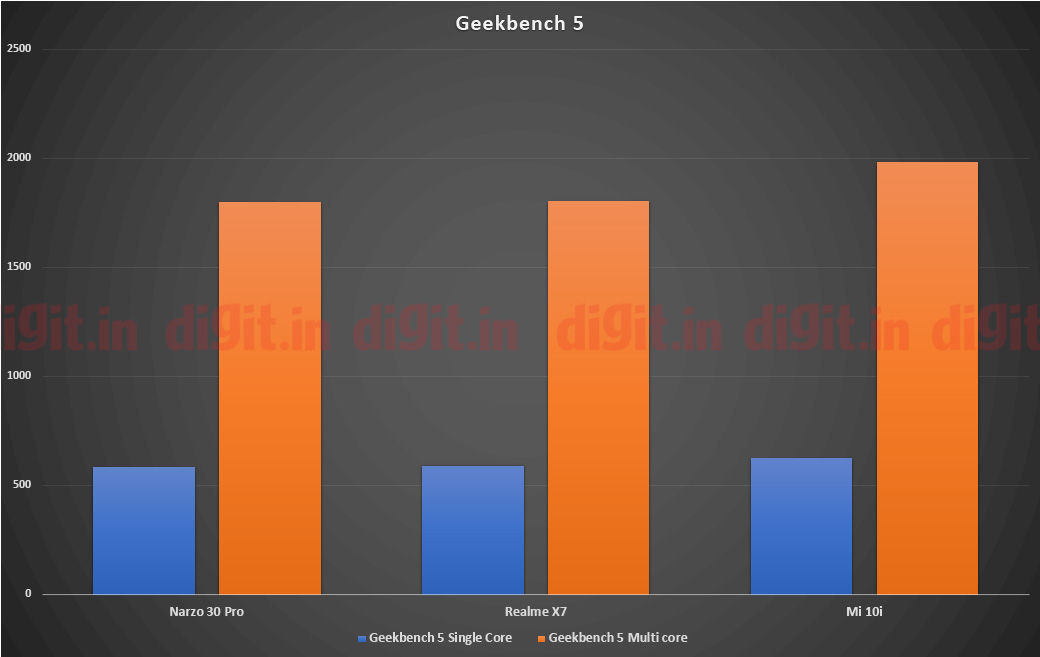 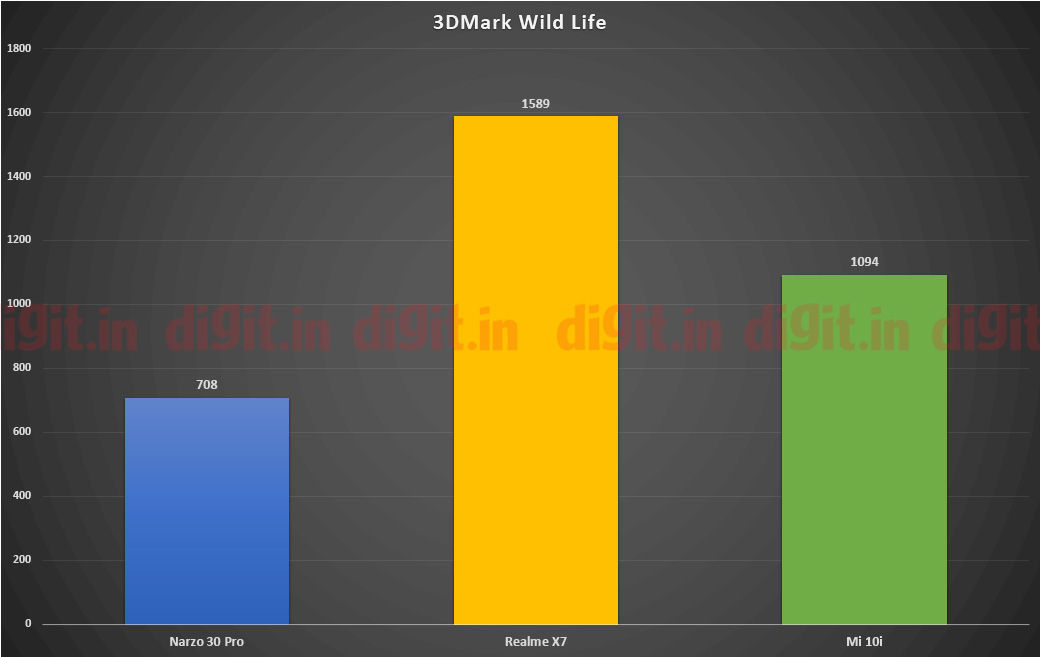 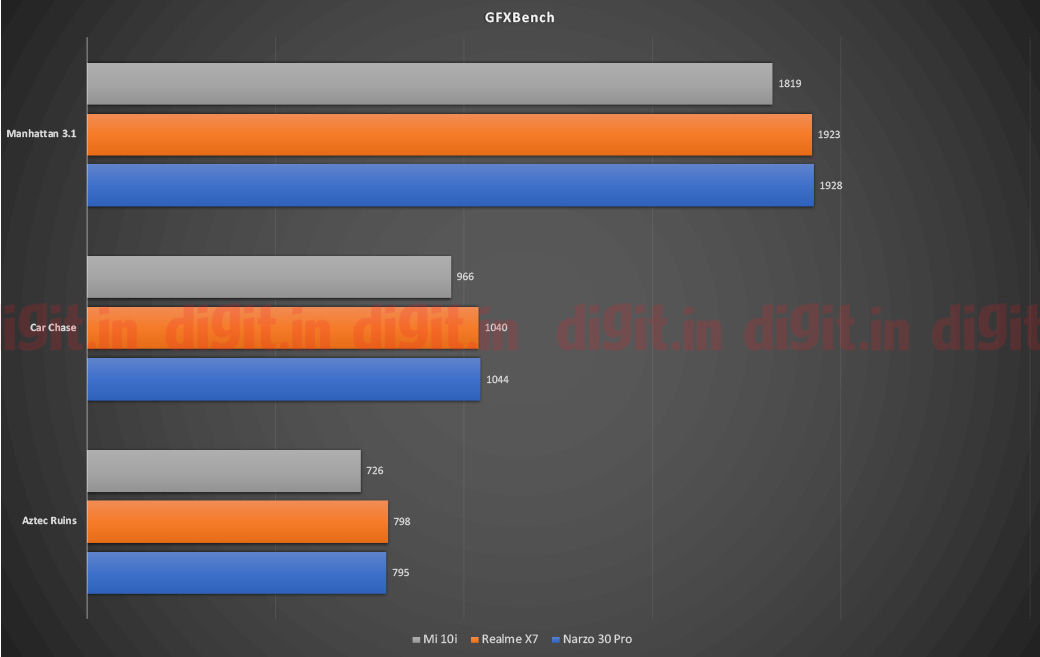 When it comes to real-world usage, let’s start with actual gaming performance. CoD Mobile can only go up to Medium graphics preset and delivers a median of 56 fps with a stability of 84 percent. Asphalt 9 manages to hit its 30fps mark, but the game does suffer from some janks every now and then. Operations like editing photos in Lightroom were also on the slower side, with some lag, but not making the experience unbearable. Performance-wise, the Realme Narzo 30 Pro left us unimpressed. It’s not so much about the price, but also about the fact that having “Pro” in the name is definitely misleading with respect to performance.

As a daily driver, the Narzo 30 Pro manages to perform decently, with only a few minor hiccups while gaming. If you’re not an ardent gamer, then the phone should provide an adequate amount of performance for basic things including your social media frenzy.

One of the things that set the Narzo 30 Pro apart is its IPS-LCD display, which rocks a 120Hz refresh rate. As an IPS LCD panel, one would automatically expect this to be a fairly color-accurate panel, but in reality, that is not the case. 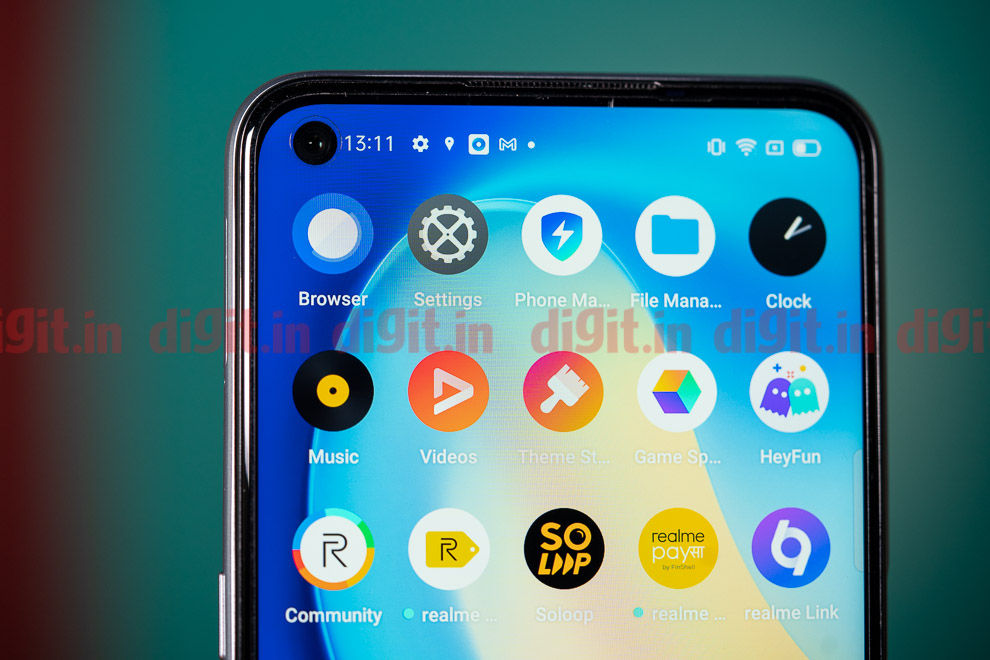 We ran the Narzo 30 Pro’s display through a full-color profile analysis and walked away with some very interesting results. The phone doesn’t offer any display modes, instead only offering the ability to adjust the white balance between warm, cold, and default. At the default setting, the display’s white balance sits at 7231K, causing a strong blue-bias. The average deltaE2000 value is 4.9 and while the average Gamma is 2.232. A closer look at the gamma curve however reveals that the display isn’t capable of maintaining the smooth gradation at different luminance points. Switching the display over to the “warm” white balance setting, we see the RGB balance become better, with the color temperature coming down to a more nominal 6529. 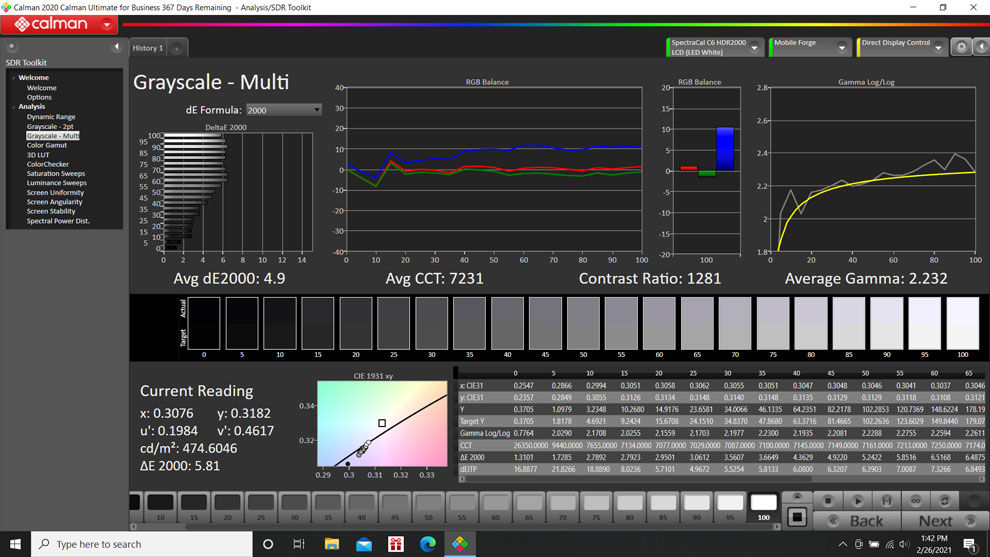 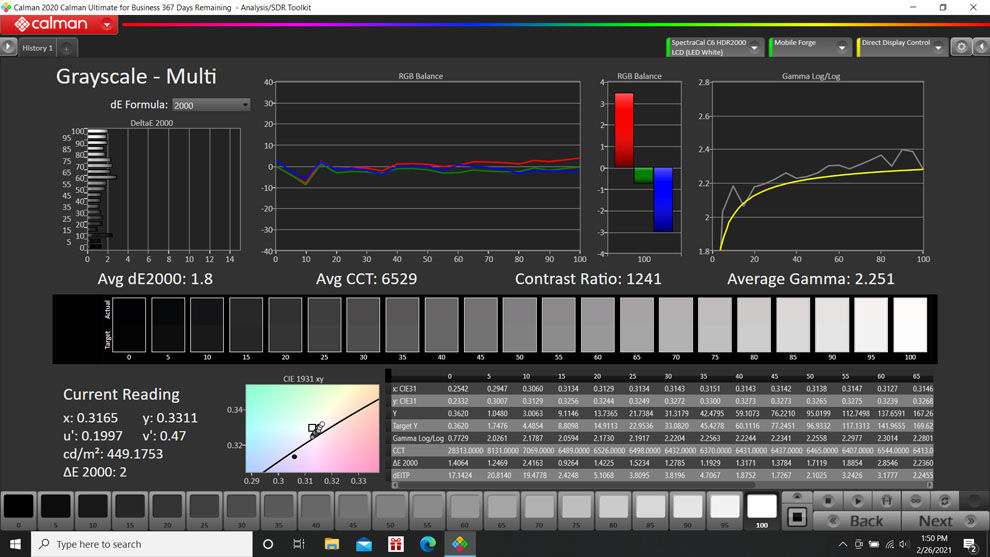 Color reproduction on the other hand is another area of the problem. In both the white balance presets we see deltaE2000 error of 4.15 and 4.33 for the warm and default settings respectively. Interestingly, the panel on the Narzo 30 Pro shows that despite the inaccurate color representation, it handles the various shades of brown corresponding to skin tones rather well. It falters with the reds and blues, oversaturating both whiles also exhibiting luma error when it comes to blues. Thankfully, the color shift isn’t too bad is barely noticeable, but those of you with a discerning eye will be able to make out that some shades of red and blue aren’t what they should be. 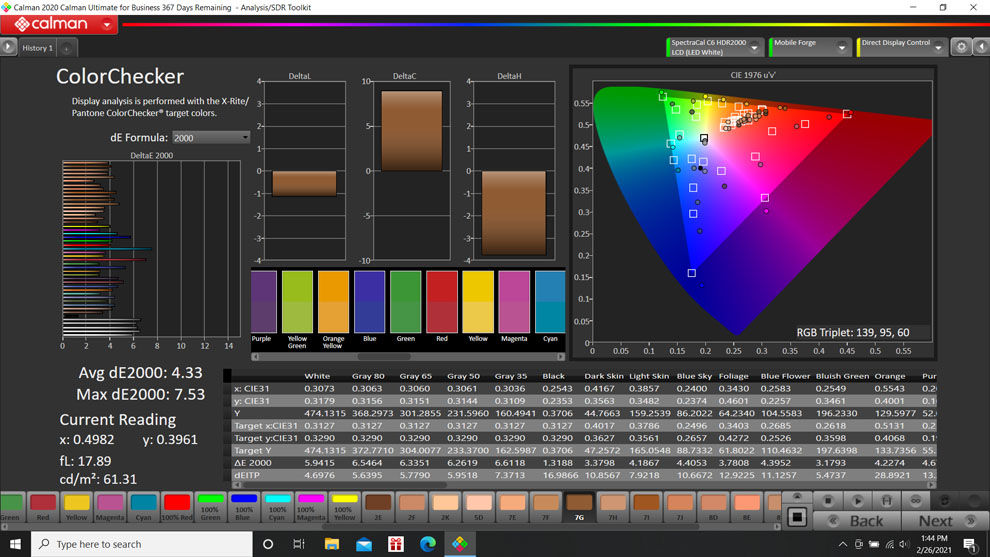 Calman sRGB color checker puts the DetaE error at 4.33, with notable issues with some shades of red. 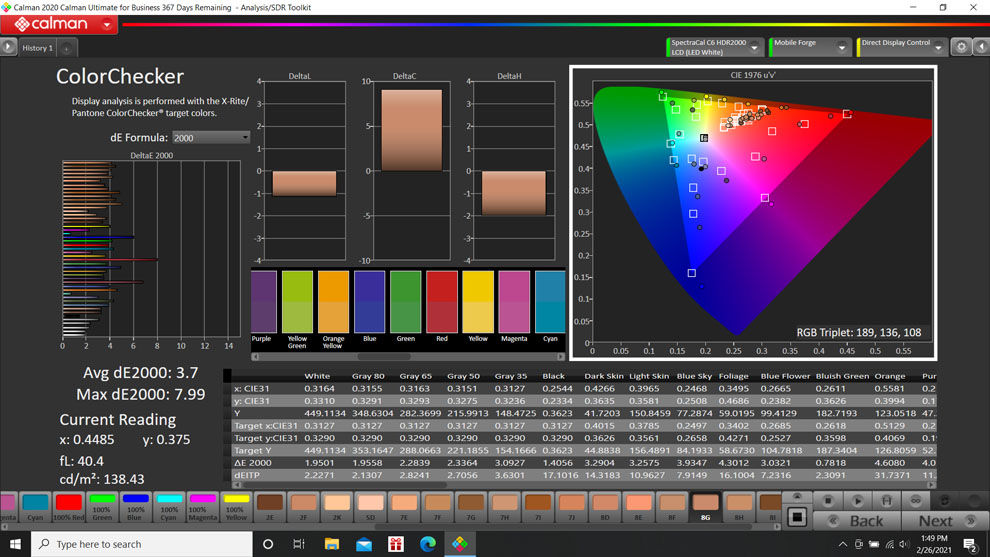 The Narzo Realme 30 Pro’s display has the best color reproduction with the white balance set to warm when tested using the Calman ColorChecker.

The display otherwise is rather bright, tipping the scales at 419nits of brightness, making it easily legible outdoors under bright light. The pre-applied screen protector does cause some reflections but taking it off solves the problem completely.

The Narzo 30 Pro’s camera stack is one of the most standard configurations available in this segment: a triple camera setup featuring a 48MP primary camera with an aperture of f/1.8. The secondary camera is an 8MP ultrawide lens while the third lens is a 2MP macro camera.

The primary 48MP camera is a reliable shooter thanks to the pixel binning which allows the camera to output images with an acceptable level of quality. For anyone thinking or expecting that the Narzo 30 Pro would bring ground-breaking innovation or improvements to the camera stack, that just isn’t the case. What you instead get is a camera whose output is very homogenous with other smartphones that offer a 48MP camera below the 15K segment. As long as you’re shooting in the default binned mode, you get lovely, well exposed, generously saturated images. There are some minor issues with the reproduction of the color fuchsia, but that’s a common problem across most smartphones these days. In fact, this particular color gives the otherwise reliable AF system on the Narzo 30 Pro a difficult time. 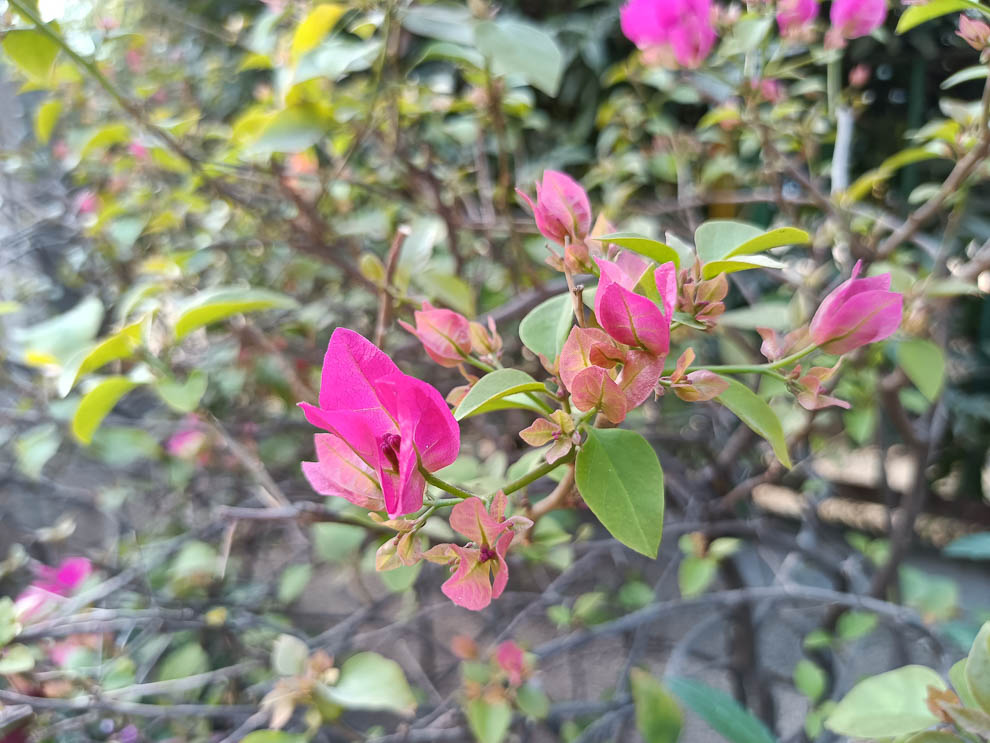 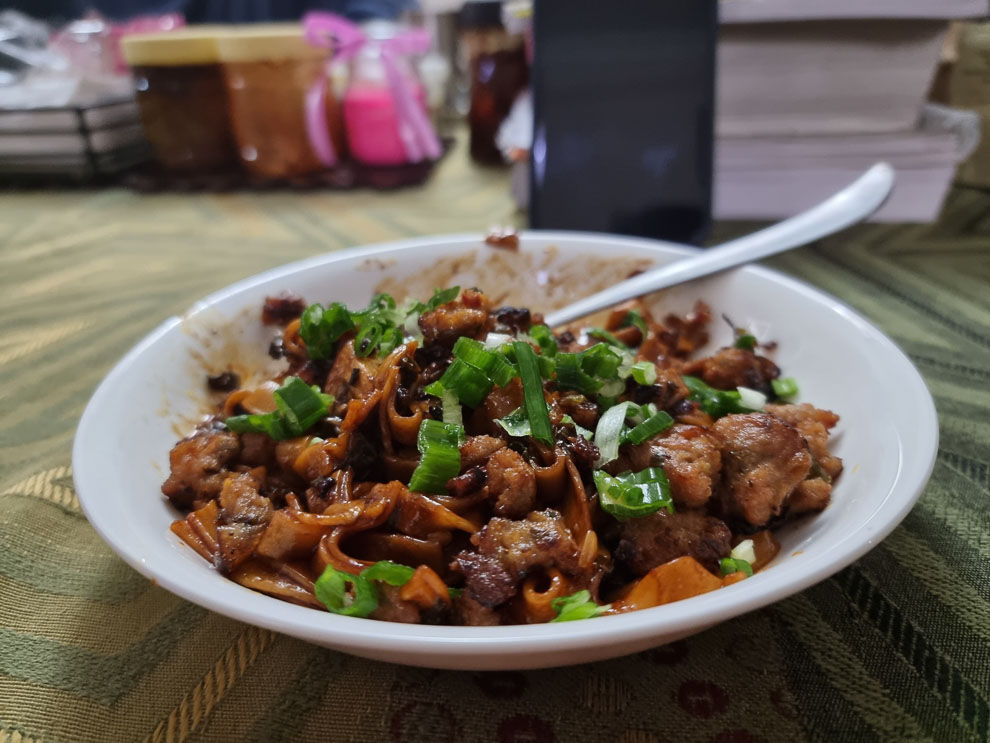 Shooting in low-light situations is where we see the camera’s weakness. The night mode bundled into the camera app does produce nice, bright images which will totally be social media worthy. However, zoom into them or try to crop into them and you will quickly notice the absolute lack of detail. The ultrawide angle camera offers decent daytime shots. The corners a little on the softer side, but nothing too concerning since it’s normal behavior. Do note that the ultrawide angle camera has a rather small aperture of f/2.4 and hence, low light performance is on the poorer side. Then there’s the 2MP macro camera, which, quite frankly, is just as good as not being considered as present. You’re going to struggle a lot to get a decent usable image out of the macro camera, and at the end of it all, it won’t be worth it. 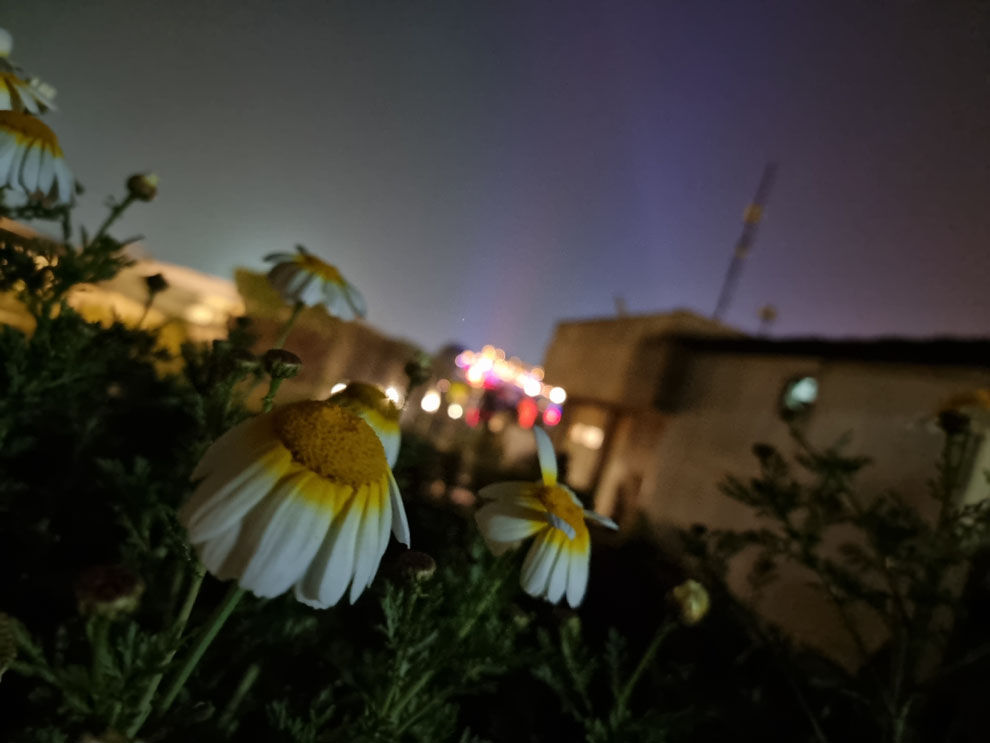 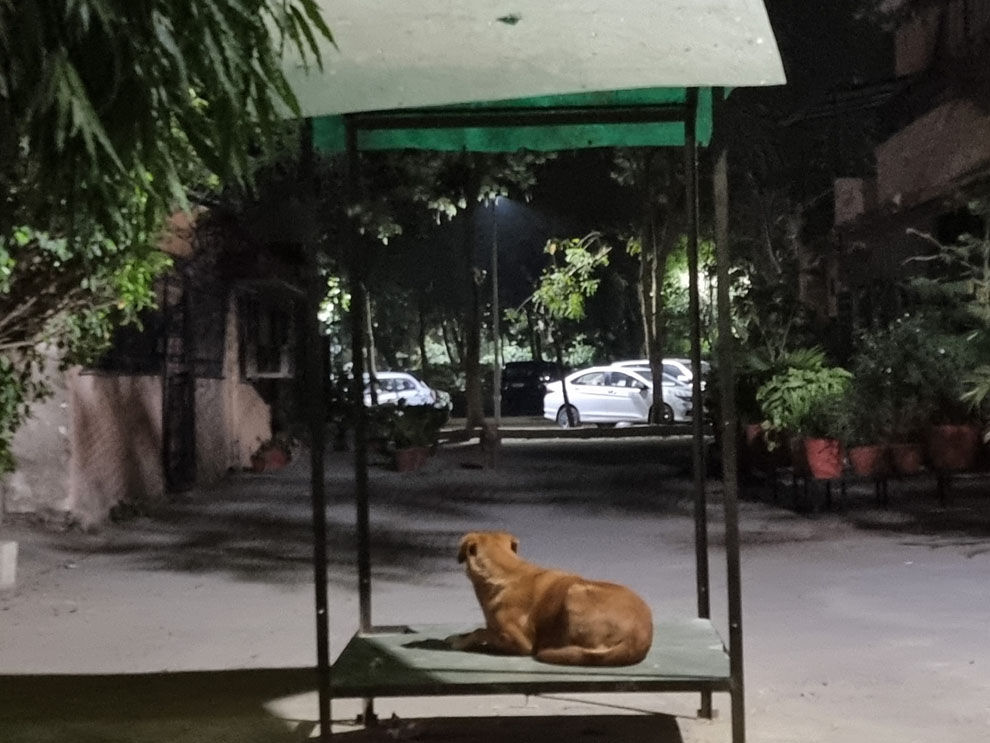 The 5000mAh battery powering the Narzo 30 Pro manages to last a little over a day. The supplied charger tops up the battery from zero to 50 percent in 30 minutes and to 100 percent in under 70 minutes flat. When it comes to endurance, you’re going to want to keep the display at the 60Hz refresh rate. When using the phone at 120Hz, the battery needs a recharge every night for sure. However thanks to the 30W fast charging, you’re not going to find yourself in a power pinch as long as you remember to charge your phone every night.

The Realme Narzo 30 Pro utilizes a tried and trusted design, with a few standout features. The first of these is the side-mounted fingerprint sensor which sits on the right side of the frame. Unlike other phones with the same feature as the Realme X7 Pro, the volume rockers are placed on the left side of the frame. We are partial to this design choice because it makes all relevant buttons easily accessible. The back of the body uses polycarbonate and the silver finish that we have feels nice to the touch. The matte finish is nice to the touch, although you’re most likely never going to get to really feel it since the phone is most likely going to live in the supplied TPU case. Besides that, the phone is surprisingly well built, with the heft adding to the perception of good build quality. For the price, there’s nothing really to complain about and users should expect a decent quality device.

The Realme Narzo 30 Pro is a decent spec’d smartphone when you consider the price point. The choice of the MediaTek Dimensity 800U processor is definitely going to be a controversial one since you can get a Qualcomm Snapdragon-powered smartphone (like the Mi10i) for just a little higher. The gaming performance of the smartphone is decent and normal, light usage such as email, taking photos, listening to music and general multi-tasking does work without much of a hitch. The cameras on the other hand feel just about average, with low light performance being particularly disappointing. the battery life on the phone is definitely commendable, as long as the display is left at 60Hz, although that shouldn’t discourage you from using the 120Hz mode given the availability of 30W fast charging. Overall, the Narzo 30 Pro doesn’t feel like a very inspired device and feels more like the one which has taken the “safe” approach instead.