StreamingRemembering the power of Puneeth Rajkumar

Remembering the power of Puneeth Rajkumar 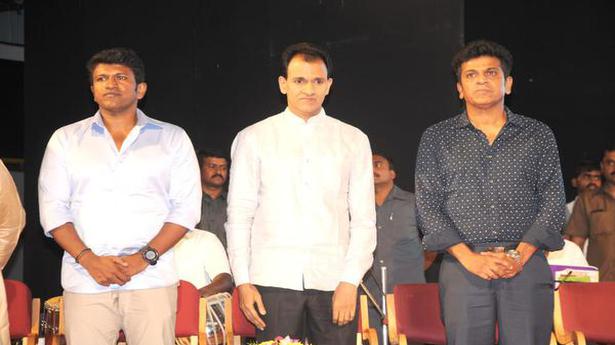 October 29, 2021. A day which shocked many of us with the sudden death of 46-year-old Puneeth Rajkumar. He leaves behind not just a bereaved family, but thousands of fans, who worshipped him as the “power star”. He was a popular hero and could romance, sing, dance, fight and do his own stunts on screen with great elan. Many of us are mourning him as an actor and son the legendary actor, late Dr Rajkumar. But, there are many (colleagues and film crew ), who have had close associations with Puneeth and have seen him as a “real life hero”. ‘Julie’ Lakshmi and Ramya (Divya Spandana) speak about the man behind the screen. While Ramya made her debut with Puneeth in Abhi, Lakshmi, who co-starred with Dr Raj as a leading lady in many Kannada films, has known Appu since he was a baby. She acted with him as a character artiste in many films. Vamshi was their last collaboration. She describes Puneeth as “the little boy who grew up to be a mega star”. The two talk to MetroPlus about Puneeth, the co-star, son, friend and guide.

Also Read | Get ‘First Day First Show’, our weekly newsletter from the world of cinema, in your inbox. You can subscribe for free here

He will always be Appu the baby for me. This is so painful and I am not able to come to terms with it. These are moments when we realise our helplessness and the uncertainty of life hits you. We always teach our children to be good, honest, live a healthy lifestyle, exercise and be fit and that all will go well with them. Appu did all that and he is gone. This makes me think about what is good or moderate and what is Karma. I am so angry with Appu, that if I see him now, I will shake him and give him a tight slap for breaking all our hearts. How can he leave us abruptly? Is it a curse that all youngsters are suddenly leaving us — Chiranjeevi Sarja, Sachari Vijay and now Appu?

I have literally seen him grow from a toddler, to a child artiste and then into a powerful hero on screen. He was always respectful and humble. When he was little, we held his hands and made him walk, and suddenly, he was a huge star, and we were old and he was holding our hands.

During the shooting of a song of Olavu Geluvu, Appu came with his mother, Parvathamma, to the sets. He was barely two. Those days we had the Nagra music system, which had huge stereos that would blast the music to the entire neighbourhood. It was like an old tape recorder with huge speakers.

While were were shooting, little Appu was in a distance with his mother, dancing away to the song we were shooting for. He was so lost in his own world. When the music stopped, he was so angry that he kicked up his chubby feet and babbled indignantly. He was adorable. He has been carried by many of us and was a child of the industry.

I believe in the cycle of karma and rebirth. Watching him dance and his passion for acting, we believed that he was the reincarnation of his grandfather Puttaswamayya. He was such a hard working artiste. When he played Krishna as a child, he insisted on walking on the hot road, which had stones and hot sand. He refused to be carried. By the end of the day, his tiny feet had cuts and blisters. That was his dedication and passion for acting.

He was an easy-going child. He was cultured never misbehaved. Appu would greet everyone with respect, love and humility. Vamshi was the last film we worked together. He was such a brilliant co-star and because I saw him as my son, I was able to emote naturally on screen with him.

Appu was close to his father and told me that he could not recover from the loss. I believe that Dr Raj must have called him up to be with him forever.

We were supposed to debut together with Appu, but the role eventually went to Rakshitha Prem. I still remember meeting Appu and his family at his place. The first thing that struck me about him was that he was friendly and down to earth. He was six years older than me and was already married. He was in his mid 20s and I was 18. Since my career started with Puneeth and his family banner, I realised that he set the standards for me. He taught me what humility and simplicity was. He carried no starry airs, which is a rarity in the world of glamour.

On the sets of Abhi, he had a make-up van and I was not given one. I was worked up as I did not know where to change and get ready. Appu came to me immediately and offered me his van. He changed and got his make up done outdoors. He ate lunch with the crew outside. He would seek my permission to use the rest room in the van, which was actually his! He was a generous man. Since that was my first film, I was terrified about the technical terms, but Appu would patiently guide me through. He was a brilliant dancer and I would struggle with certain steps, and he would patiently teach me and even ask for the steps to be simplified and help me with my dialogues too.

He treated every one as his equal and never bossed around any one. We actors are known to be emotional and moody, but not Appu. He always had a smile on his face. I do not think any one has ever seen him frown, or be angry or upset.

Once, we were shooting in a school and there were so many children. Sometime during the day, an ice cream vendor come outside the school gate. Appu bought all the ice cream for the school children.

This is a side of his not many know. We have seen him help people on the sets, paying for their weddings, children’s education and funerals. He was a man with a huge heart, filled with compassion. Such people are rare to come by. Appu will be missed greatly.

As told to Shilpa Anandraj