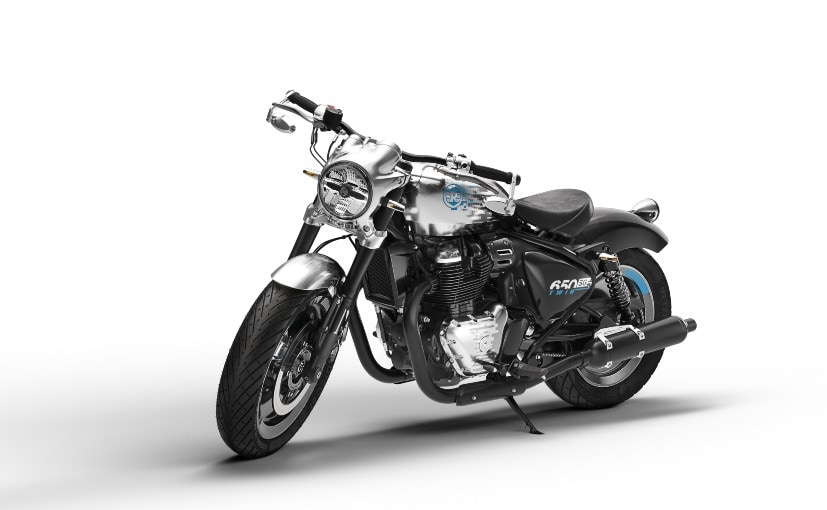 Royal Enfield has taken the wraps off the new SG650 Concept motorcycle at EICMA 2021. The new concept arrives as the brand celebrates its 120th anniversary and likely previews a new cruiser from Royal Enfield that will join the Interceptor 650 and Continental GT 650 in the future. The Royal Enfield SG650 Concept showcases a transition phase for the company representing the old-school analogue age while integrated into the digital present. The concept project pays homage to Royal Enfield’s rich history of custom motorcycles, but one that wasn’t encumbered by the past.

Speaking about the new concept, Mark Wells, Chief of Design, Royal Enfield, said, “The aim, through this challenge, was for the Royal Enfield team to embark on a new creative journey with the SG650 Concept; starting from within Royal Enfield’s classic design sensibilities and then pushing into a whole new era of what the Royal Enfield’s of the future could look like.”

Adrian Sellers, Group Manager, Industrial Design and lead for the SG650 Concept project, said, “We’re really excited to unveil this concept and write another chapter in the rapidly evolving story of Royal Enfield design. It is always exciting to design for a “What if…” scenario, and the brief to create a motorcycle that would both be recognisably Royal Enfield, but at the same time push what a Royal Enfield could be was a real challenge.  This was a wonderfully collaborative and rewarding project to develop, as it required the creative input of many different aspects of the design team – from Industrial Design to Color Trim and Graphics and CGI – each contributed a piece of the puzzle to  bring this other world to life.”

The Royal Enfield SG650 Concept conveys transitions through its finishes and materials. This includes the heritage-inspired polished aluminium front end. There’s a digital graphic on the fuel tank to showcase the transition. Several components of the concept have been individually fabricated too. The fuel tank has been CNC billet machined from a solid block of aluminium, as have the wheel rims with integrated ABS.

The SG650 Concept also gets bespoke designed brake calipers and dual front brake disks. It uses USD front forks with integrated aluminium top yoke/nacelle unit and low rise extra-wider bars with all aluminium switches. The rear gets twin shocks, mounted to the classic chassis loop. The concept also gets handstitched black leather floating single seat that pays a nod to the brand’s past.

Mehul Choksi Says May Be Kidnapped Once Again, Taken To Guyana

Gadgets Monster - 0
Vicky Kaushal and Katrina Kaif fans, we're warning you in advance, here! Be prepared to be completely blown away by the wedding pictures and...