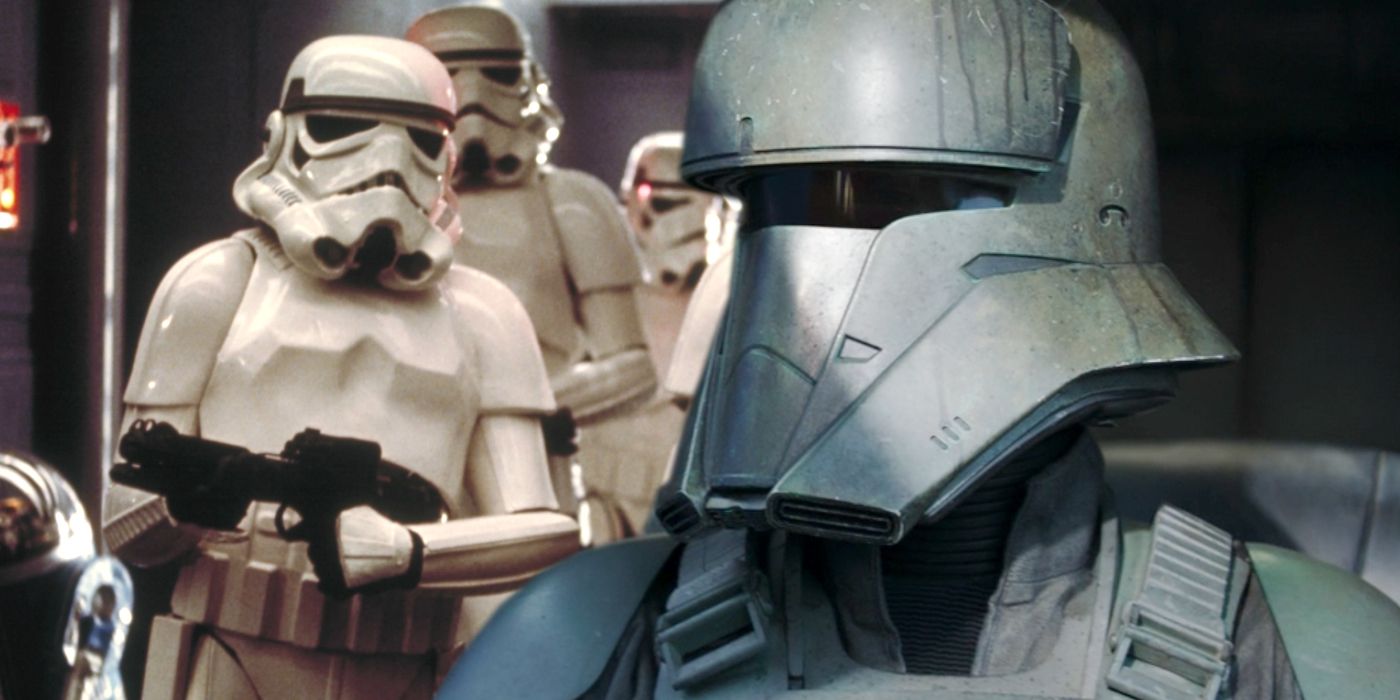 Stormtroopers have been referred to by TK numbers since 1977 – what does it mean and how does it reflect the way the Empire sees its troopers?

“TK numbers” have existed in the Star Wars universe since the first movie in 1977 but they have received new attention after they were referenced in The Mandalorian season 2, episode 7, “Chapter 15: The Believer.” The numbers have always been important but have gained notoriety over the years as the Star Wars expanded universe has continued to grow one way or another, even after Disney decanonized large amounts of it. Here’s everything you need to know about TK numbers in The Mandalorian and beyond.

The TK numbers are first referenced when Luke Skywalker infiltrates the Death Star disguised as a stormtrooper that is known as “TK-421.” In The Mandalorian, a tense scene shows Din Djarin, disguised as an Imperial Juggernaut Pilot and sneaking around an enemy base when an Imperial Officer named Valin Hess asks him for his TK number. In Star Wars: The Force Awakens, Finn used a variation on a TK number as he was originally known as “FN-2187.” So these numbers have always been present, but what do they mean for the Empire, and how does the idea behind them change for the First Order?

In short, the TK numbers are simply a specific Imperial code used to identify military personnel. In Star Wars: A New Hope, Han Solo is asked for his operating number, and while that might seem simple there is a rich history behind these codes. The clone troopers who came before the stormtroopers were not given names at birth but were given identification codes that resemble TK numbers. Fan-favourite Clone Captain Rex was born as CT-7567; however, early on in the Clone Wars, CT-7567 somehow earned the nickname Rex, which became his primary moniker for the rest of his life. Conversely, Imperial stormtroopers are enlisted soldiers who rarely have any need of their birth names after they have joined the Stormtrooper Corps as they lose their individuality to the service, working as a mirror image to the clone predecessors who fought to find their independence when it had been denied of them. Throughout the non-movie material of both canon and the original Star Wars timeline, the Expanded Universe (now known as Legends), Imperial operating numbers consist of a set of letters followed by three or four digits. In most cases, especially stormtroopers, the two letters are “TK,” (likely referencing Star Wars), but there are many instances of personnel, including stormtroopers, with designations other than TK numbers. In Star Wars Rebels, Imperial Officer Cumberlayne Aresko goes by the operating number LRC-01. The Imperial ISB Agent Alexsandr Kallus is known as ISB-021. In Jedi Night, a stormtrooper refers to himself as LS-261.

What this indicates is that the TK designation doesn’t necessarily refer to stormtroopers in particular, but a specific unit of the Imperial military. In the canon anthology book From a Certain Point of View, the stormtroopers who serve on the Death Star and board the Tantive IV are referred to by TK numbers. The TK in their operating numbers likely designates one of the units under the command of Darth Vader and Grand Moff Tarkin. Similarly, every stormtrooper who appears in the Legends novel Rebel Force: Hostage uses an operating number that begins with “TB,” indicating their shared division.

The Galactic Empire’s successor state, The First Order, all but confirms this purpose of operating numbers. First Order stormtroopers are neither clones nor enlisted beings. The First Order abducts children to train and indoctrinate them their whole lives to serve as stormtroopers. Their only names are their operating numbers, and FN-2187, later known as Finn, is revealed to be part of the FN Corps in the canon anthology book Before the Awakening. This is further supported by the First Order’s CS-Squad in Star Wars Resistance. Every stormtrooper’s name in this squad begins with “CS.”

Valin Hess asking for a TK number instead of an operating number makes sense since Djarin and Mayfeld were disguised as Juggernaut Pilots under his command. It can be assumed that all troopers in the Morak Imperial remnant are part of a larger legion referred to by TK operating numbers. Given that Imperial forces with TK numbers have been seen at the Battle of Scarif, capturing Princess Leia, patrolling the first Death Star, and, as revealed in The Mandalorian season 2, participating in Operation Cinder, the larger unit it refers to has a storied history in the Star Wars franchise.

Next: The Mandalorian: Every Star Wars Easter Egg In Season 2, Episode 7

David Miller is a staff writer for Screen Rant, indie comic writer, and life-long lover of all things Star Wars, Marvel, and DC. He was born and raised in New York and has a degree in English from Rider University. He relates to Peter Parker maybe a little too much.