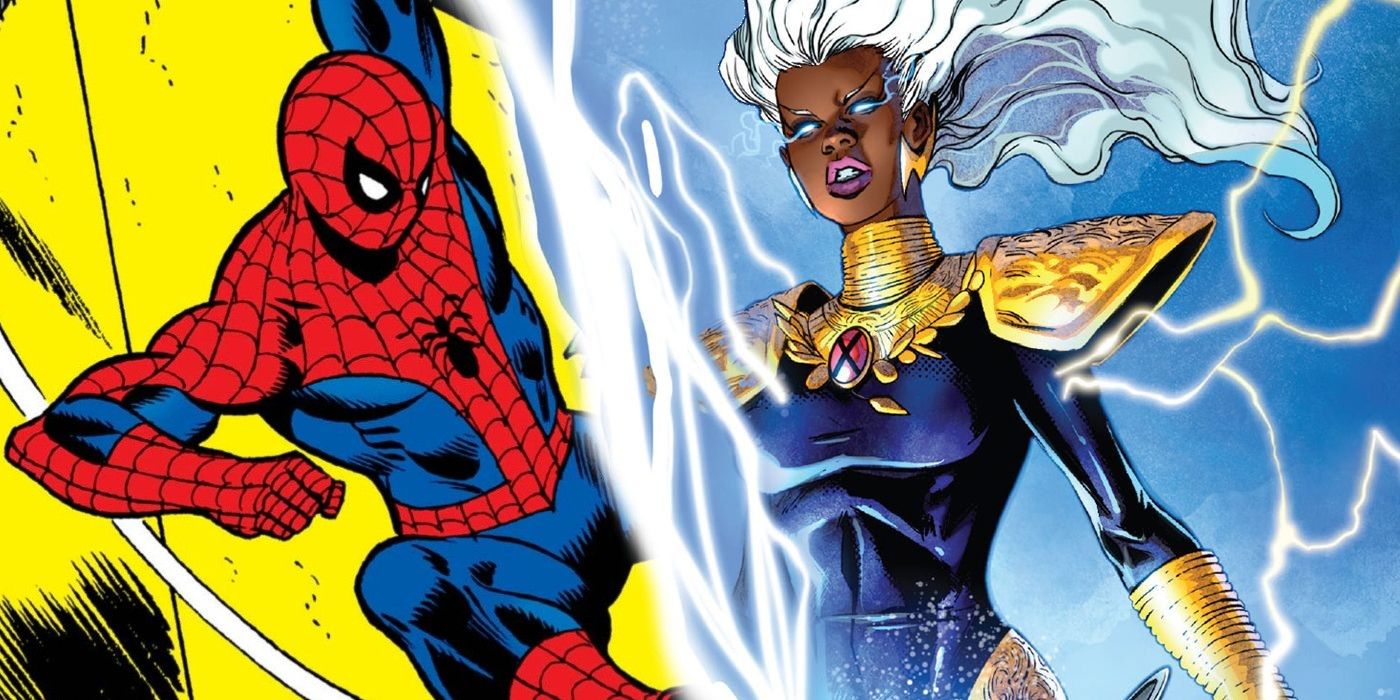 X-Men veteran and omega-level mutant Storm combines with the web-slinging Spider-Man in one of Marvel’s weirdest Avengers variant teams.

Two heroes who frequently have very little to do with each other are Storm and Spider-Man. Though the two have worked together as part of a larger team on occasion, they are hardly an inseparable pair. Despite this though, one wild What If…? story from Marvel combined the two heroes into one of the wildest hero combinations.

As the new Regent of Mars, Storm’s proven to be a just leader amongst her fellow mutant man and a ruthless warrior against mutant foes like Tarn The Uncarrying. Her natural leadership skills and strategic prowess earns her leadership of the X-Men after challenging Cyclops for the role and winning -without her mutant powers. Shortly after, she’d lead the X-Men team: X-Men Gold with teammates Jean Grey, Colossus, Iceman, Archangel, and Bishop versus Cyclops’ X-Men Blue with Wolverine, Jubilee, Psylocke, Beast, Rogue, and Gambit. Storm’s heroics would attract the Avengers, who’d recognize the Weather Godesses’ accomplishments and recruit her as an official member in Avengers vol. 4 #19. So, of course, it’d make sense for the current Voice of Sol to lead a group of variant heroes as a web-slinger.

Marvel gag comic Marvel: Now What?! (2013) #1 by Brian Posehn and Scottie Young is a one-shot collection of comedic shorts that follow mashups of X-Men and Avengers characters. In one of those mashups, Storm becomes Spider-Storm, the new leader of the X-Vengers -a team of original characters based after current Marvel heroes for the 21st century-. The variant hero team includes martial artist She-Shang Chi, Ben Grimm aka Thing Jr, and a gamma radiated Red Cable. No matter the team, Storm remains the same leader in any universe, including a wacky one where Peter Parker is dead, and Dr. Octupus inhabits his body.

The base of Storm’s costume matches her original side cutout leotard and signature black knee-high boots from Giant-Size X-Men and Uncanny X-Men before changing to her 80’s punk mohawk look. The front of her leotard transitions to a traditional web design with the Spider-Man emblem redesigned to fit lightning bolts, insinuating her powers are a combination of the two. Her adorable web cape combines her shaw cap from her original X-Men costume and many Spider-Man costumes cape iterations. Her headpiece crown connects with her half cowl- similar to Spider-Woman’s classic costume– and finishes her look with an adorable spider web cape. The X-Vengers’ leader also shouts a slogan that combines the notorious X-Men and Avengers war calls, further extending to Storm’s involvement on both teams.

The hilarious Marvel comic pays homage to Storm’s leadership throughout Marvel comics by combining her classic X-Men look with the titular Spider-Man. No stranger to weird transformations as the omega mutant has turned into disgusting forms by Tarn The Uncaring and the King in Black Knull; however, Spider-Storm is the perfect combination of the fearless X-Men and the lovable web-slinger hero.

Which Intel processor is best suited for you