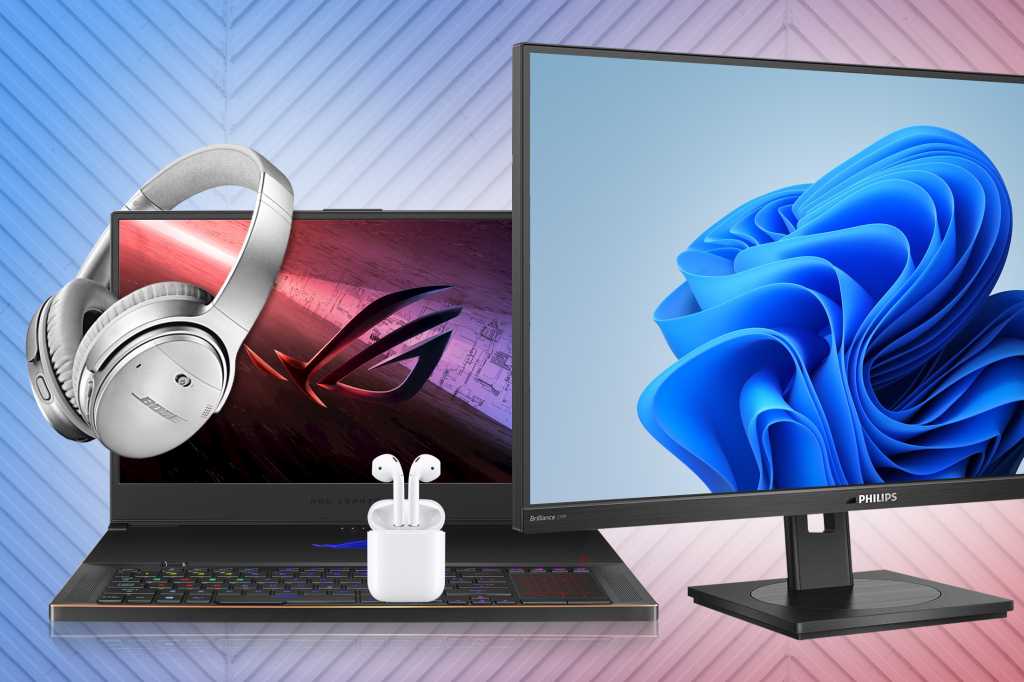 It’s that time of year again. Early Black Friday deals are already rolling out, with more new sales showing up every day. But this isn’t your typical shopping season. For 2021, there’s concern whether shipping issues will mean less stuff on the shelves for the holidays.

As we’ve already been hearing for months, the global supply chain is seriously backed up with bottlenecks occurring at key points. Hoping to deal with an already difficult situation, retailers stretched out the shopping season as much as they dared, what with shipping timelines stretching to frustrating levels.

These supply problems are supposed to be felt acutely in technology, or so the market watchers say. Intel warned that chip shortages were compelling computer makers to focus on high end PCs, while supplies of mid-range laptops and desktops—the biggest targets for massive Black Friday discounts—would be much more limited. We’ve already seen a number of notable mid-range laptop deals so we’ll have to see if these concerns will be felt more acutely later in the shopping season.

Nevertheless, there is some weirdness and uncertainty revolving around the holiday season, so smart shoppers should be on the lookout for the best possible Black Friday deals. We’re checking for new tech deals daily to help you stay ahead of the curve.

Here’s a selection of deals that we like and are already available.

This is a good entry-level smartwatch for iPhone owners that looks identical to the flagship Apple Watch Series 6, but lacks the always-on display, Sp02 sensor, and ECG app. Still, if you want to track your sleep, heart rate, and workouts while getting notifications on your wrist the Apple Watch SE is an excellent and affordable option even at full price. With this Black Friday discount, it’s a no-brainer.

The Google Nest Hub is a great smart display with Google Assistant built-in. That means it delivers traffic and weather updates, can play videos via Chromecast, and serve as a control for your smart home. You also get three free months of YouTube Premium when you fire up the device. If you need a smart display, or someone on your gift list does, the Nest Hub is an excellent choice.

We loved the 2.5-inch SATA SSD and call it the best SSD for most people. It’s one of the fastest SATA-based SSDs we’ve tested, it’ll work with any PC that has a drive bay, and its price has always been rock-solid for the performance on offer. So when it went on sale for Black Friday at its best price ever, we knew we had to include it here. This SSD offers nice capacity and would be ideal as a primary drive for anyone still rocking a hard drive, or as a secondary drive in a PC that has an M.2 drive and a free drive bay for the Gold S31. You probably won’t find a better deal on a SATA SSD with this much capacity and performance this holiday season.

Getting a cheap streaming device for your TV has never been easier. Not only is this TV stick loaded with all the apps you want, it also works with Alexa. That means you can use Amazon’s personal voice assistant to launch apps and search for content, as well as get information from the web, and control compatible smart home gear. That’s a whole lot of value for just $20.

This TV is just nuts, and something that would fit in really nicely with an out of control PC gaming setup. This 65-inch 4K HDR TV rocks FreeSync for buttery smooth gaming at a maximum refresh rate of 120Hz over HDMI. It also support Dolby Vision, and has a stunning brightness of 1200 nits to really make all those color variations shine. This TV is also a smart TV for streaming from all your favorite services, and it’s packing Apple AirPlay 2 and Chromecast to stream to the TV from your other devices. Whether you’re gaming with this stunner or just kicking back with your favorite shows, this deal is not to be missed.

To start, you can get this CPU at Amazon for $389, but applying the coupon code BFPAYA526 knocks another $15 off the top. This is the cheapest price yet for the 5800X, and it is one fantastic high-end processor. The chip comes with 8 cores, 16 threads, and a max boost clock of 4.7GHz. These latest Ryzen CPUs kill at productivity and gaming, and at under $400, this processor offers some serious value at a time when finding a good price on key PC parts isn’t so easy.

We love Chromebooks that cost around $200 and this one fits the bill at its sale price. The Asus CX1 would make a nice everyday laptop for a student or someone who mostly lives in the cloud. It has some nice specs for a Chromebook, including 64GB of onboard storage, a 14-inch 1080p display, a spill-resistant keyboard, 802.11ac Wi-Fi, a microSD slot, and an Intel Celeron N3350 processor. In addition to running Chrome, this laptop can also do Linux desktop apps, and Android apps from Google Play.

See the Chromebook CX1 at Amazon.

If you want a Chromebook with a little more “oomph” and a lot more flexibility, the Asus Chromebook Flip C433 is an excellent value. It starts with a 14-inch touchscreen, connected to a flexible hinge that can turn this into tablet or tent mode when you need to. It has 8GB of RAM, which is double what most Chromebooks have, and 64GB of onboard storage with a microSD card reader if you need to add more. The Chromebook Flip also has a solid dual-core Intel Core m3-8100Y. This laptop can run Linux apps and Android apps, plus it has two USB 3.1 Type-C ports and one standard USB 3.1 port.

This is the perfect time of year to get some true wireless earbuds at an excellent price. JBL’s Black Friday deals include the Endurance Peak II for just $50. It comes with one-touch voice assistant access, up to 30 hours of battery life with the included charging case, and a good amount of bass, according to JBL. These earbuds are IP67 rated for making them sweat proof and waterproof. If you’re looking for stocking stuffers, this might be perfect.

Our favorite smart thermostat is on sale right now for Black Friday. We loved the Ecobee SmartThermostat with Voice Control, giving it 4.5 out of 5 stars in our review alongside an Editors’ Choice Award. It’s responsive, has better sensitivity than previous versions, and it integrates with Amazon’s Alexa, Google Assistant, and Apple HomeKit. If you want to add some smarts to your home’s environmental controls, this is a very good choice. It’s a steal at this price.

See the Ecobee SmartThermostat with Voice Control at Amazon.

The Microsoft Arc Touch Mouse is our favorite wireless mouse, and right now it’s on sale for $30. It’s an excellent travel companion that folds flat until you need it and then it pops up into a comfortable shape. Instead of clickable buttons you get a touch pad, and it lacks a wireless receiver, opting for Bluetooth instead. We thought it was solidly built. It takes two AAA batteries, with battery life lasting up to six months.

These smart TV deals offer a lot at a great sales price. They’re rocking Amazon’s Fire TV software for streaming video and music, and come with and an Alexa-powered remote. They also have three HDMI 2.0 inputs and a single HDMI 2.1 eARC port.

The big deal with the Omni models of Amazon’s smart TVs is that they feature hands-free Alexa integration. That means you can use the TV’s built-in mics to launch apps, get web-based information from Alexa, or even control compatible smart home devices.

We reviewed the Nest Cam, giving it 4 out of 5 stars and an Editors’ Choice Award. This is a battery-powered camera that works indoors or out, and Google says it can get up to seven months of operational time on a single charge. It can also be continually charged with the accompanying magnetic charging cable if you mount it close to an outlet.

Anyone looking for good value with a mid-range soundbar should check out this deal over at Walmart. This 4.1 channel soundbar not only comes with a wireless subwoofer, but also a rear speaker kit. We haven’t reviewed this soundbar, but upgrading your living room sound for under $150 is a killer deal especially with a well known and trusted brand like LG.

Kingston’s computer storage gear is usually very good and this drive is well worth a look. At 2TB you have all kinds of space for the average PC owner, and it comes in a blazing fast NVMe SSD package. This is an excellent deal, as long as your PC’s motherboard can take M.2 2280 drives, and most modern motherboards should. Kingston says you can expect sequential read speeds up to 2,100 MB/s and sequential write speeds around 1,700MB/s.

All 20 of Adobe’s content creation apps are available in the content-generating package, and right now you can get it at an excellent deal. Even with the discount we wouldn’t exactly call Creative Cloud cheap, but if you’ve been eyeing this subscription package then this deal is a great time to jump in. Creative Cloud features After Effects, Dreamweaver, Illustrator, Photoshop, Photoshop Express, Premiere, and a whole lot more.

The “Plus” version of our favorite vacuum/mop hybrid is a whole lot cheaper for Black Friday. It’s still pricey, but a lot less pricey than it usually is thanks to a whopping $230 discount. To get this deal you have to click the coupon underneath the price on the product page. In our review, we gave the S7+ 4.5 stars out 5 and an Editors’ Choice Award. We said the S7+ “is an exceptional robot vacuum/mop hybrid that gives equal attention to hard floors and carpet. Paired with Roborock’s Auto Empty Dock, it provides one of the most automated cleaning experiences to be had.” This robot vacuum offers 2,500Pa suction, and the auto empty dock can store up to 60 days of dust. For this price it’s also packed with mapping, LiDAR navigation, and automated control via smartphones, as well as voice control with Amazon’s Alexa, Google Assistant, or Siri.

See the Roborock S7+ at Amazon.

Ian is an independent writer based in Israel who has never met a tech subject he didn’t like. He primarily covers Windows, PC and gaming hardware, video and music streaming services, social networks, and browsers. When he’s not covering the news he’s working on how-to tips for PC users, or tuning his eGPU setup.

5G Expected to Roll Out in India by End of Next Year: Govt at IMC 2021

Spoiler alert: Google says Squid Game was the most trending TV show in 2021

Gadgets Monster - 0
When Sonic the Hedgehog 2 arrives next year, Ben Schwartz’s version of the title character won’t be the only anthropomorphic animal involved in the...

‘Hawkeye’ Fans Are Loving The Stylish Return Of An MCU Rising...