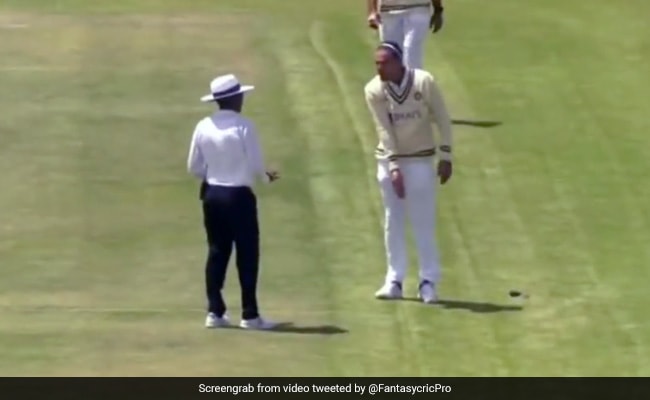 Young Indian leg-spinner Rahul Chahar had a go at the on-filed umpire after his LBW appeal was turned down during the India A vs South Africa A unofficial test in Bloemfontein. The incident happened on Day 2 of the match on Wednesday. On the fifth ball of the 128th over of the South Africa A innings, Chahar, bowling around the stumps, foxed right-handed batter Sinethemba Qeshile with a flatter delivery. Qeshile tried to play it off the backfoot but ended failed to make contact. The ball rapped onto his pads and Chahar went up in a big appeal. Seeing the umpire shaking his head, the leg-spinner appealed again before throwing his sunglasses away in frustration as the umpire did not change his mind.

The South African pair ended up taking a single but Chahar was still seen having an animated discussion with the umpire.

Rahul Chahar might get pulled up here, showing absolute dissent to the umpires call.

A double appeal and throwing his equipment. #SAAvINDA

Chahar’s frustration was fuelled by the flat track and the dominant manner in which the hosts batted in the first two days of the match after winning the toss. Captain Pieter Malan (163) and Tony de Zorzi (117) hit impressive centuries to power South Africa A to mammoth 507/7 before they decided to declare the innings.

For India, seamers Navdeep Saini and Arzan Nagwaswalla got couple of wickets apiece. Chahar, on the other hand, was the most expensive Indian bowler on display. The leg-spinner gave away 125 runs in his 28.3 overs picking up just one wicket.

India A, however, gave a strong reply to South Africa A. Abhimanyu Easwaran scored 103 and added 142 runs for the second wicket with Priyank Panchal, who missed his century by just four runs.

Opening the batting with Panchal, Shaw scored an attacking 48 off 45 balls that included nine fours.
Hanuma Vihari, whose exclusion from the Test side surprised many, was dismissed for 25.

At stumps on Day 3, India A reached 308 for 4 with Baba Aparajith (19) and wicketkeeper-batter Upendra Yadav (5) in the middle. They still trail South Africa A by 201 runs.

Pakistan round up: Onus on govt to find missing persons, court says

Gadgets Monster - 0
The ‘Rudri’ director says his second film looks at the mental trauma created by the pandemic and lockdowns In is Badiger Devendra’s second directorial venture....

This Is What Akshay Kumar Posted After Diu Schedule Wrap