TOP STORIESWhat Caused It, What Next

What Caused It, What Next

Indian stocks slumped the most in six months as a rating downgrade by Morgan Stanley and a central bank plan to drain liquidity soured sentiment in the world’s best-performing major market.

The S&P BSE Sensex slid 1.9% in its biggest loss since April 30, with heavyweight bank shares being the biggest drags on the benchmark. The drop comes amid rising investor concern about valuations after the gauge more than doubled from its March 2020 lows. 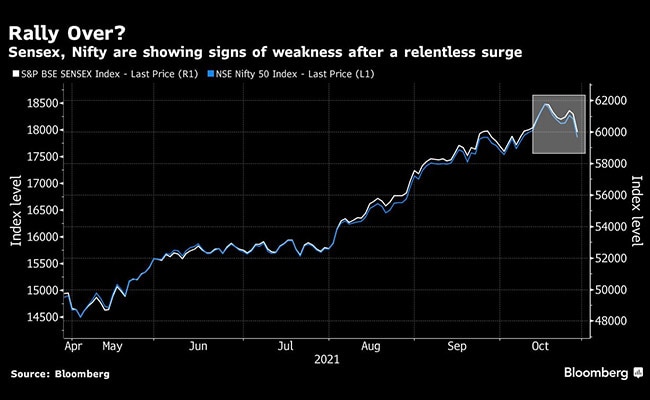 The Reserve Bank of India said late Wednesday that it will drain cash from the banking system for longer periods, spurring concern the move may temper gains in an equity market driven by record-low policy rates and a retail-investing boom. Morgan Stanley downgraded Indian stocks to equal-weight from overweight, following a similar move by Nomura earlier this week.

“At 24-times forward P/E, we look for some consolidation ahead of Fed tapering, an RBI hike in February and higher energy costs,” MS analysts led by Daniel Blake wrote in a note dated Oct. 27.

ICICI Bank Ltd. and HDFC Bank Ltd. were the biggest drags on the Sensex Thursday, with each losing more than 3%. The expiry of monthly derivative contracts today may also have contributed to the market’s losses, traders said. The NSE Nifty 50 Index also fell 1.9%.

“We reiterate our cautious view on markets and suggest restricting leveraged positions,” said Ajit Mishra, vice president research at Religare Broking Ltd. “This fall in the index has derailed the recent recovery and we may see a further slide in the following sessions.”

Equity markets across Asia retreated Thursday amid global concerns that the prolonged pandemic and elevated inflation will hurt economic recoveries.